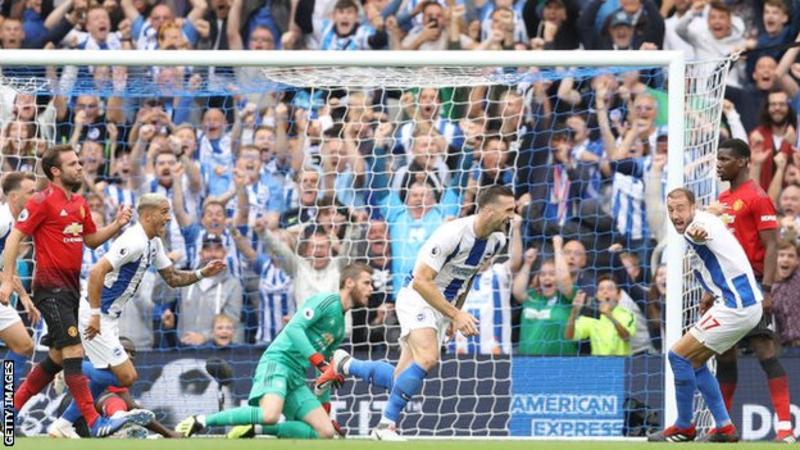 The Seagulls beat United in May to retain their Premier League status, but few expected a repeat on Sunday.

However, Brighton capitalised on a poor start from United to take the lead on 25 minutes, when Glenn Murray flicked home Solly March’s low cross.

But Eric Bailly’s rash challenge on Pascal Gross inside the area presented Brighton with the chance to restore their two-goal advantage, which Gross took.

United improved marginally after the break but never really looked like threatening a fightback, though Paul Pogba netted an injury-time penalty after Duffy brought down Marouane Fellaini.

It was a day to forget for United fans, especially after their neighbours City swept aside Huddersfield 6-1.

United boss Jose Mourinho warned in the summer that his side faced “a difficult season” if they did not strengthen before the transfer window closed.

The Portuguese had highlighted his side’s defence as an area that needed bolstering, but deadline day passed without any new arrivals.

Mourinho’s concerns were laid bare here, with his defence caught out on a number of occasions by Brighton’s quick movement.

Bailly, in particular, struggled. Aside from giving away the penalty he also miscontrolled a pass in the second half that momentarily put March through before the Ivorian was able to recover.

Bailly and centre-back partner Victor Lindelof – both Mourinho signings – have now been a part of a defence that has conceded four goals in the first two games of the season. It took United nine to let in that many last season.