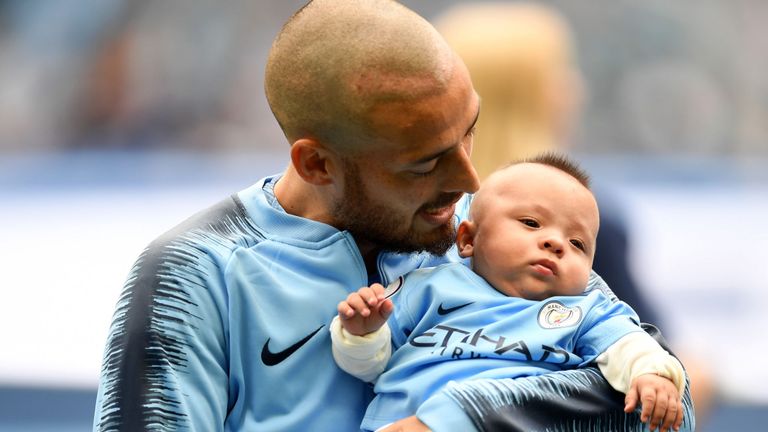 Manchester City midfielder David Silva marked his 250th Premier League appearance with a sublime free-kick as his eight-month-old son stole the show at the Etihad on Super Sunday.

The Spain international introduced a very special guest on the pitch prior to City’s 6-1 victory over Huddersfield, with baby Mateo held in his father’s arms as the two teams lined up.

The club’s mascot for the day was born prematurely in December 2017 with Silva having to return to Valencia regularly during the 2017/18 campaign with his son in hospital for the first five months of his life.

Silva revealed his son was “fighting day by day” in January, but he was given the all-clear to go home in May – and the 32-year-old said manager Pep Guardiola’s understanding means he will forever be indebted to him.

“He made an outstanding performance, the first game after the ­summer time,” said Guardiola. “Of course, he was so motivated because his family, parents, wife, and especially Mateo were here.

“He scored an amazing goal for him. His son will never forget the first time he saw his father play football, he scored this outstanding goal.

“We met him the first time a two days ago. Today, he was in the locker room with all the team, all the squad.

“Last season was a tough moment for all his family. Fortunately the little boy fought a lot and he is here. It’s a special day for him, for us, for David.”

Dressed in a City kit barely three months after he had been discharged from hospital, Silva was keen to share the joyous occasion with his social media followers as he posted a team picture with Mateo from the dressing room.

Benjamin Mendy led the tributes to Silva and his son on Twitter after the match.

The France left-back wrote: “Yes 6-1.. yeah 1 or more assist for me (certainly more). Yeah Kun three goals and all that… but our MOTM today it’s him (and I’m no talking about his dad) #mateo.”