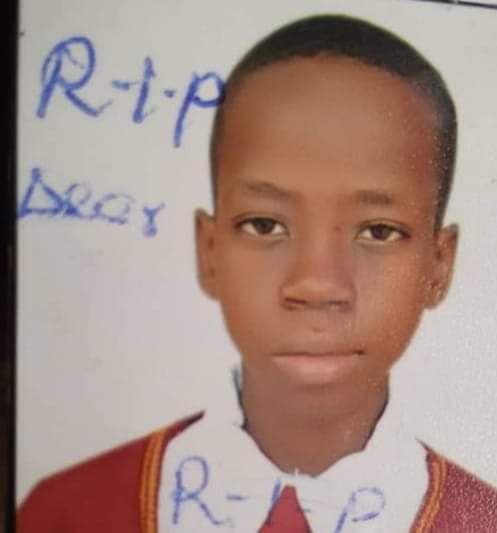 The Principal / Manager of Denis Memorial Grammar School, DMGS, Onitsha, Rev. Canon Anieto Chigozie, has written the school on the sudden death of a JS1 student of the institution, who died on Tuesday, February 12.

In his message communicated via Dengramites_World

<dengramites_world@googlegroups.com> on Wednesday, February 20, which was made available to Anaedooline.com on Thursday, February 21, the principal gave details of how the incident took place; adding that no student was yet to agree he was responsible for throwing the stone that killed the boy.

“We had two events in school that day: Termly Clinical Evaluation and

of the Obijackson Hostel with a Mock Ball.

“From the information we got from the boys, the boy, Emmanuel Chukwuebuka Nnanna, slumped and they took

him to the Sick Bay. And the staff nurse couldn’t handle it and the boy

was rushed to the General Hospital, Onitsha. He died.

“We called the father’s number severally, and it was switched off. We had to send a staff, who knew where his shop was. And she got another number from them there. He was contacted. And before he came, we took the child to Iyienu Hospital where he was confirmed dead.

education both in Anambra State government and the Diocese. And we are

in touch with family.

out who threw the stone. Nobody has owned up till now. It’s quite unfortunate that this happened.

“What happened may be purely an accident. He was not stabbed. He was not flogged to death. He didn’t fall from a height.

“Why didn’t we inform Dengramites on time? The bad news is not good news. We

were in talks with the family and we fixed an appointment for Friday, 22nd

While urging prayers for the peaceful repose of the soul of Chukwuebuka Emmanuel Nnanna, he also called on the people of good will to pray so that the family is also consoled.

Log in to Reply
Futo: Police Confirms Death Of Third Student In Foursome Sex April 5, 2019 at 6:50 am

[…] to drugs. The CP said, “Yes, I can confirm to you that the third student is dead. I just got the information today (Thursday) that he has died. He died in the hospital where he was admitted. His death has risen to […]