I Can Never Be Wrong- Kumuyi 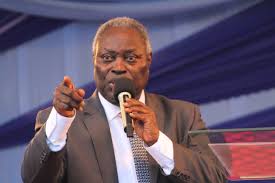 I Can Never Be Wrong- Kumuyi

Firstly, let me start this piece by admitting that I am a proud Christian. In all my life, I strive to practice my Christian faith in consonance with the dictates of the Holy Scriptures as documented from the teachings of Jesus Christ. I am still far from meeting the minimal prescriptions as reflected in the teachings of Christ.

But I have not allowed my human shortcomings to deter me from persistently knocking on the door of salvation where I see the light. I have unshakable faith, a day would come when God Himself would descend his hands to show me the glorious path to His kingdom. And satisfied with this mindset, I embrace every teaching from anointed men of God which seeks to remind, strengthen or empower me to get closer to God.

It is from this standpoint, I find the upbraids of the comments of the General Superintendent, Deeper Christian Life Ministry, (DCLM), Pastor William Kumuyi, last Sunday in Lagos by some Christians claiming to be Nigerians very unpalatable and ungodly.

In a sermon at DCLM entitled “The Believers’ Preservation Until the Day of Visitation”, Pastor Kumuyi trenchantly admonished Christians and indeed, Nigerians against verbal, media or any form of attack on leaders in the country. Although, he did not mention specific name of the leaders, but it was clear to me the revered messenger of God was referring to every leader in the country beginning with President Muhammadu Buhari. And Kumuyi was emphatic that real Christians must

And Kumuyi was emphatic that real Christians must shun violence; but exude Christ-like disposition in character, conducts and conversations. It’s a fine reminder to Christendom, if you ask people like me. His words, “Don’t attack the president of the country whether in words or in the newspapers or through internet. Honor kings; don’t disrespect or dishonor the governors. Don’t disrespect leaders of the community and leaders in the church. If we are to honor the governors in the states, how much more the Pastors.” When I decoded the deeper meaning of his message to Nigerians, it told me clearly that Pastor Kumuyi meant political, traditional, corporate and Christian leaders. But some Christians are not comfortable with the crux of his message and have rebelled against it in media commentaries or some private places in dissension. I don’t know why Pastor Kumuyi caution to us not to attack constituted authority, as symbolized by leaders or President of the country or the Governor of a state by whatever means should draw the ire of some Christians. Has he uttered anything sacrilegious? I don’t think so. And if I decoded the message of this highly spiritual and venerated servant of God, Pastor Kumuyi, it means he was voicing admonishment to Christians not to disobey President Buhari or to restrain from utterances that will derail the administration from delivering the dividends of democracy to Nigerians.

But I have read an avalanche of commentaries on the issue, some positive, and others draping with venom against Pastor Kumuyi and the hate on the person of President Buhari. But Pastor Kumuyi was right and his posture and preachments have explicit and unambiguous Biblical support. Therefore, Romans 13: 1-3 echoes it defiantly. It says, “Everyone must submit to governing authorities. For all authority comes from God, and those in positions of authority have been placed there by God.

I have been very ashamed in recent times at the inciting comments of some ordained men of God, which are laced with hate and encouragement to violence. Of course, we remember the barefaced tantrums of Apostle Johnson Suleiman asking his congregants to kill any Fulani herdsman at sight.

Its unchristian. Even in the post-election era, I am not excited with many comments emanating from some churches in communiques they issued after synods or conferences on the leadership of Nigeria. Christian Association of Nigeria (CAN) and the Northern Christian Elders Forum (NCEF) have at different times stoke the fire of violence in public utterances, rather than quench it.

I am sure, the brethren leading these religious associations would have time to ponder over Pastor Kumuyi’s message? Though, I am not of the Deeper Life Christian sect, but I admire Pastor Kumuyi’s modest lifestyle, which truly embodies the virtues of Jesus Christ. And one obvious aspect of his exemplary character is his sticking to the title of “Pastor.”

He has not added a higher one to his name, albeit, leader of DCLM, unlike his contemporaries in the Pentecostal fold who regale in bogus titles. His humility, decent and disciplined life is also enviable and manifest in certain doctrines he has introduced on his congregants such as dress code and the restriction on watching TV because of its tendency to corrupt the mind with lascivious images. And throughout Pastor Kumuyi’s decades of evangelism, he has never been enmeshed in fraud accusations’ or given to the temptation of any kind in Nigeria or elsewhere.

But we have heard of several financial scandals rocking the Body of Christ, where some Pastors are either accused of swindling their churches or partaking in the sharing of illicit wealth in the secular world. So, in Kumuyi, we can truly find the meaning of the crucifixion of Jesus Christ and His virtues of endured suffering, humility and hard work for public good.

Kumuyi addresses issues as he sees it and never in a hurry to crucify anyone. He is upright and strives to abide by the virtues of the teachings of Christ as much as humanly possible. He is a man whose life is not given to filthy lucre and contended with spreading the gospel and saving souls from eternal damnation.

He deserves no such attacks from Pastors who mount the pulpit to preach violence, propagate hate speeches and fan the embers of disunity but turn a blind eye to their various court cases on alleged moral or financial corruption. In an era when the majority of Pastors have gone in pursuit of material prosperity, we are elated to still have one end-time Prophet like Pastor Kumuyi to stand for Jesus Christ. It doesn’t sound plausible to me that a thief should judge a saint.

We are living in perilous times, as Pastors are using their own mouths to confess adulterous lifestyles before their congregation; we are faced with female members who are up to protest continuous sexual molestations by their shepherds and many such immoral acts rocking the “powerhouse” of God.

We should rather consider the voice from Pastor Kumuyi as divinely sent to us and worthy of redeeming our weakened Pastors. Yet, we are still doubting if that could be of God’s?

We must look beyond the veneer and the attractions of this world. Its only then we can have the grace to discern that the message from Pastor Kumuyi is a perfect message by a perfect messenger. Those not comfortable with Pastor Kumuyi because of his open support for President Buhari, a man anointed by God to liberate our country from poverty and squalor; from sickness, deprivations to prosperity, such a man is free to disown Jesus Christ and build his own church.

He Has Failed To Perform His Responsibilities; Woman Told Court