See How Gbajabiamila Created A Scene At The Plenary 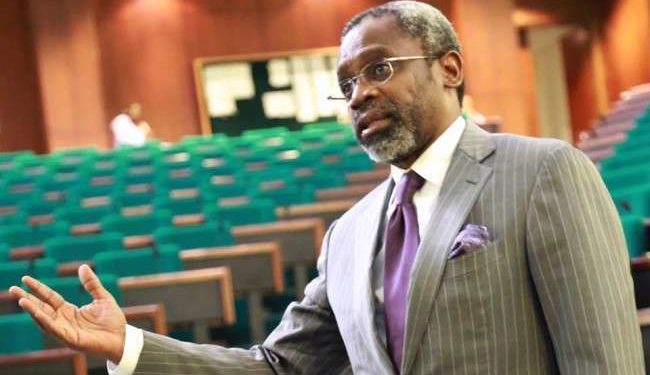 See How Gbajabiamila Created A Scene At The Plenary

The Speaker of the House of Representatives, Mr Femi Gbajabiamila, on Thursday blocked every move by some Peoples Democratic Party Members to raise issues relating to the parallel principal officers produced by the minority parties on Wednesday.

Mr Ndudi Elumelu and Mr Kingsley Chinda had emerged as factional Minority Leaders, with
the House recognising the former.

Before plenary began on Thursday, Chinda had taken a seat reserved for the Minority Leader on the front row.

READ ALSO: Things You Need To Know About The Newly Elected Speaker Of The House, Femi Gbajabiamila

The Speaker’s procession entered the chamber at 12:08pm, in the procession was Elumelu.

After saying the opening prayers, Gbajabiamila approved the votes and proceedings of Wednesday.

While the Speaker was cheered by many members in the chamber, he noted that the adoption was in line with Order 9 Rule 4 and Order 10 of the House’s Standing Rules.

Responding, Gbajabiamila said, “Without even asking what your point of order is, you are overruled.”

Again, Chinda wanted to raise a point of order but Gbajabiamila stated, “I will not recognise you, you are not in your allocated seat.”

Again, the chants of “Gbaja!” rent the air.

The Speaker went on to swear in a new member. Shortly after, Chinda again wanted to raise a point of order.

Then an APC member from Abia State, Mr Benjamin Kalu, raised a point of order to decry the crisis in the chamber when the lawmakers were elected to address important and urgent national issues.

He particularly called for investigation of a member, Mr Gogo Bright, who on Wednesday removed the mace from the rightful position in protest against the announcement of Elumelu as the Minority Leader.

Kalu cited Order 6 and Section 19(b) of the Legislative Privileges Act which state bar lawmakers from disrupting legislative activities, violent acts, among others.

He partly said, “I am not one of the ranking members, I am just one of the new members who came here because of specific interest, to add my own quota to the making of laws; not to learn how to fight or how to become violent. Yesterday, I was psychologically threatened; I was traumatised by the events that played out in this house. It is supposed to be a hallowed chamber. While I was seated here, I saw many ranking members who we respect so much, especially Honourable Bright from Rivers State who went for the mace.
“It is an attempt to destroy the integrity, the sacredness of this House. I saw that play out yesterday and I felt so bad. I was to ask: Are members now allowed to become sergeants-at-arms or play their role as provided in our order? My prayer is that this House constitute a committee to look into what happened yesterday.”

In his ruling, the Speaker noted that it was a matter of privilege, which would not be subjected to a debate. He however stated that the action by Bright was “a breach of our individual and collective privilege.”

He said, “We will refer the matter and the gentleman who he (Kalu) specifically named to an ad hoc ethic (and privileges) committee, the membership of which would be made before the close of sitting today.”

The Speaker later set up a committee led by the Deputy Majority Leader, Mr Peter Akpatason, to probe into the mace matter.

A member of the Chinda-led faction, Mr Tajudeen Yusuf, also raised a point of order to notify the House that the votes and proceedings of Wednesday earlier approved by Gbajabiamila did not contain the letter signed by 99 opposition members nominating Elumelu and others as minority and principal officers.

Ruling, Gbajabiamila said, “Your point is noted.” Again, Chinda attempted to raise a point of order.

Gbajabiamila responded, “Honourable Chinda, do not try my resolve. You are not on your allotted seat, so you will not be heard today.”

Another member of the Chinda-led faction, Mr Mark Gbillah, raised a point of order to say, “With all due respect, I consider my privilege breached by the comments you made which appear to contravene the law, that seem like a threat you’re making to the honourable members of this House.”

The Speaker was cheered again.

Several other members of the minority faction attempted to raise issues, whom the Speaker blocked from speaking.

Later in the session, the Speaker announced that he received a letter from the All Progressives Congress caucus naming the majority principal officers.
The officers included Alhassan Ado-Doguwa as the Majority Leader; Peter Akpatason as Deputy Majority Leader; Mohammed Monguno as Chief Whip; and Nkeiruka Onyejeocha as Deputy Whip.