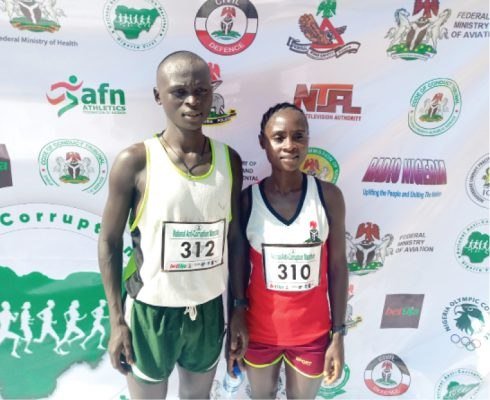 Emmanuel Gyang and wife Deborah Pam Badung have emerged champions in the male and female category of the second edition of the National Anti-corruption marathon race held yesterday in Abuja.

The 21.03km race which started around 8am at the Eagles Square was to commemorate this year’s United Nations International Anti-Corruption Day.

Gyang who came third last year won this edition after 1hr 06m and will take home the cash prize of N1m.

According to him, he prepared hard for this race after coming third last edition.

“I feel so happy to have won the race. Last year, I came third and this time, I made the first position. This year I had special training, I prepared hard, stayed focused to achieve my goals. I trained in Jos because it has a good terrain. Training in a city like Abuja is not that good because of the weather,” he said.

In the same vein, Deborah said she didn’t prepare very well of this race but won after 1hr 19m while asking for more support. “The competition was hard for me because I trained for just 50km but I thank God that I made it. “The federation should be able to take us outside the country for camp to experience how things are done over there. We also lack physiotherapists who can take care of us when we get injured,” she said.

Speaking at the end of the race, the National Coordinator, Mr Jacob Onu, said the aim of the race was achieved which is the awareness on the fight against corruption. “We have made it clear from the beginning that what we are doing in marathon plus. We drive our marathon through the awareness of dangers of corruption to the society. In this edition, we have moved higher by organizing a summit in a university community,” he said.

WOW!: Girl Narrates How Four Of Her Parents’ Neighbours Had Sex With Her For Seven Years