Looming Crisis: Nnamdi Kanu Threatens To Hunt Down Children Of Commissioner Of Police Okon If… 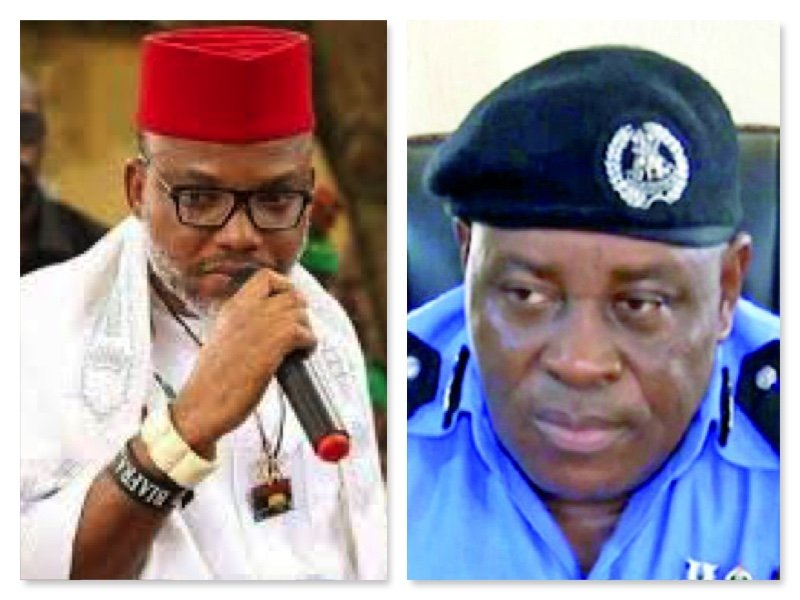 The leader of the Indigenous People of Biafra, Nnamdi Kanu, has threatened to deal with the Abia State Commissioner of Police, Ene Okon should there be any killing on 14 February when his parents would be buried in Afaraukwu.

In a message on Facebook, Kanu downgraded the commissioner and called him ‘Inspector Okon”.

He wrote: “If Inspector Okon and his commanders come to my father’s house to kill anyone on 14th February 2020 at my parents’ burial, we will hunt down their children,” posting Okon’s photograph along.

Kanu’s threat was the latest in the battle of wits between the security agents and Kanu’s followers in IPOB as the burial date of the parents gets nearer.

Okon in an interview on 7 February warned IPOB members to steer clear of the burial.

“Do you think we will sit down here and allow IPOB to participate in the burial? Whoever thinks along that line is fooling himself. IPOB will dance during the burial and the police elephants will dance too.

“I have already reached out to the traditional prime minister of Afaraukwu (Nnamdi Kanu’s community) and told him that if they want the burial to go smoothly and for police to give them security, they should tell IPOB not to near the area not to talk of participating in the burial. If they fail to adhere to what we’ve told them, that means they do not want the burial to go on smoothly because we are going to scatter the place.

“IPOB is proscribed by the Federal Government. I, as the Commissioner of Police in Abia, cannot sit here and allow any proscribed group to operate anywhere in this state. I am saying this again for emphasis that there is no way police will allow a proscribed group to participate in the burial of the King and Queen of Afaraukwu simply because they are the parents of their acclaimed leader, we will not allow that and we cannot take anything for granted in the face of abundant intelligence on threat by IPOB.

Following the interview, Ohanaeze Youth Council(OYC) issued its own warning asking the police to keep off the burial.

President of OYC, Igboayaka O. Igboayaka warned that any move by the police to disrupt the event in Afaraukwu, Abia state would be resisted by his group.

“We in OYC see this tough talk and boastful outburst from the police boss in Abia as reopening the wounds of the Nigeria-Biafra war, which was declared “no victor, no vanquished” by the then Nigerian military government.

“Okon’s deadly outburst at this point, if not dragging Nigeria back to the repeat of the 1966 crisis, is capable of causing chaos and anarchy in the country. As worrisome and shameful as this could be at this hour, we are compelled to advise Mr. Okon that no reasonable security agency launches or deploys a crime-fighting system where there is no crime.

“Any move to disrupt the burial or launch ‘Operation Elephant Dance’ by the Nigeria Police Force would be solely viewed as an act of conventional war against Ndigbo, and we must resist it with anything within our reach.”

Kanu’s kinsmen, expecting some trouble, have asked IPOB members to keep away from the burial.

The Afaraukwu community in Umuahia North council area of Abia State last week Wednesday declared members of the Indigenous People of Biafra personae non gratae at the burial of the parents of Nnamdi Kanu, their founder.

The burial of His Royal Highness Eze Israel Okwu Kanu and his wife, Ugoeze Meme Sally Kanu is slated for 14 February in their country home, Isiama Afaraukwu community in Umuahia local government area of Abia state.

JUST IN: Nigerian Police Reveal What Will Happen If Nnamdi Kanu Returns For Mother’s Burial

President General, Afaraukwu community, Chief Ikechukwu Ndubueze, who briefed the media on the preparations for the burial, said the community wants a peaceful burial for their late monarch and his wife.