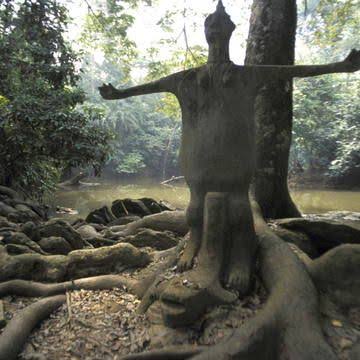 As the world we know is so big, and we might not be able to cover or go to every places on Earth but then, we can just know those places, mysterious places on Earth are places where it’s formation is strange to man, places we don’t know how they were formed or why they where formed, some of these places might be harmful to man, while some are just strange. Now we can just know these places and may one to visit them one day.

These are the top 10 most mysterious places on Earth.

READ ALSO: What Causes The Biggest Downfall Of Most Man

8. Tower of London in England: There are stories surrounding the tower, stories of hauntings and mysterious happenings, sighting of Thomas Becket a martyred saint, however the most mysterious there is the apparition of the headless body of one queen seen lurking on the spot she was killed

7. Miracle stream in Nigeria: In 2013 a mysterious stream suddenly appeared in Enugu, from nowhere, and it is said to have appeared and disappeared 42 years before.
Testimonies of healing for those that drank from it and those the swam in it.

4. Crooked forest in Poland: A small forest of over 400 pine trees bent over almost 90 degrees at the trunk the twist back straight again, growing vertically to the sky.

Nigerian Celebrities You Did Not Know Are Twins (Photos)

2. Banff springs Hotel in Canada: Home of a plethora of ghost stories and mysterious things, people said an entire family was murdered in a room in the hotel, then sight of re-appearings.

1. The Bermuda triangle – Atlantic ocean: Tales of lost or disappeared ships, people, planes, properties, while no one knows where they disappeared to, it is said to be magnetic, and it is also called Devil’s triangle.

Now you have know the most mysterious places in the world, kindly comment if you have anything to say.

Use Of Mobile Phone At A Petrol Station Can’t Cause Fire Accident, See Why