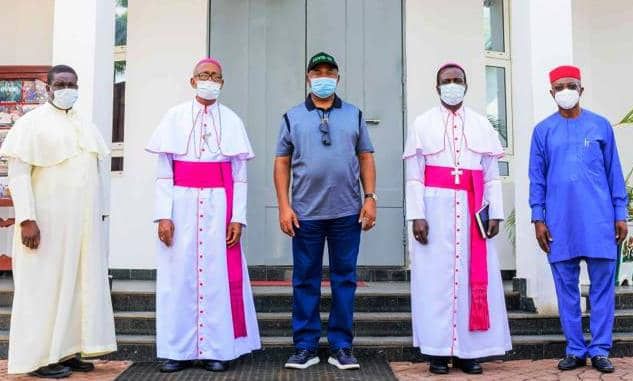 The administration of the All Progressive Congress, APC in Imo State, led by Governor Hope Uzodinma is in for a full backup of the Catholic Archbishop of Owerri Ecclesiastical Province, Anthony J. V Obinna and his Auxiliary, Bishop Chikwe, following their visit to the government House, Owerri yesterday.

The Bishop’s visit to the Imo seat of power is believed to have opened a fresh concern in the State.
Reason remains that Archbishop Obinna although a Roman Catholic Bishop is not a pushover, but when he does, it raises concerns.

Obinna’s resilience was obviously seen during Rochas Okorocha’s era where he didn’t slumber in putting the governor right whenever he erred.

Same was applicable to Emeka Ihedioha, even though he was often seen with the then governor and played the role of a religious leader.

However, it would be recalled that the clergy maintained a close contact with the ousted governor, Emeka Ihedioha during his PDP reign, until the January 14, 2020 that pronounced Uzodinma governor.

Since then, neither the Bishop nor his assistant had been sighted anywhere around the Douglas House, not until yesterday.

While Obinna is said to have prayed for the governor and his appointees to deliver democracy dividends to Imolites, it is believed that he seized the opportunity to draw nearer to the Uzodinma led administration.

Not only that he is an ordained clergy, Bishop Obinna is well known for his fearless dispositions in correcting the ills of the government, as well as applauds when it achieves a people oriented goals.

We can affirm that there is more to the visit as the church through her leaders may serve as a watchdog to the incumbent government.

“The Virus Is Real” – Nigerian Doctor Who Survived Coronavirus Advised