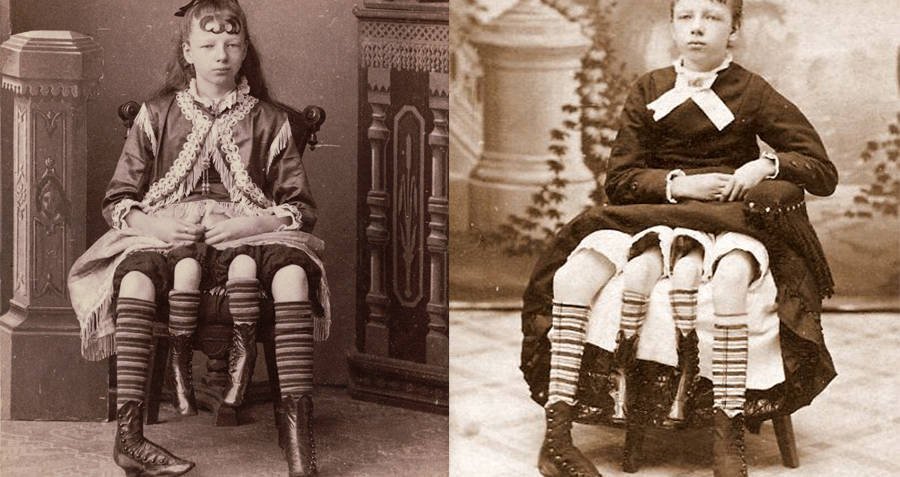 Josephine Myrtle Corbin was born on May 12, 1868, in Lincoln County, Tennessee, with a rare fetal anomaly known as dipygus. Her body was perfectly formed from her head down to her navel, below which it divided into two pelvises, and four lower limbs.

Her birth was not marked by anything out of the ordinary, and her mother claimed to have had typical labor and delivery, apart from the baby being momentarily in the breech position.

Overall, Myrtle Corbin was a perfectly healthy, active, and thriving baby girl. All in spite of having four legs.

After being born with four legs, two normal-sized ones on either side of a pair of diminutive ones, the doctor who delivered Myrtle Corbin felt it necessary to point out the factors they felt could have resulted in her deformity.

First, the baby’s parents, the doctors said, were about 10 years apart in age. William H. Corbin was 25, and his wife Nancy was 34.

Second, the doctors noted that the couple bore a striking resemblance to each other. Both of them were redheads, with blue eyes and very fair complexions. They actually looked so similar that the doctors felt it necessary to explicitly point out that the two were not “blood kin” in their medical reports.

It seemed that the young girl was simply an oddity – her parents had had seven other children, all of whom were perfectly ordinary.

Medical reports of the time stated that between each pair of legs, there is a complete, distinct set of genital organs, both external and internal, each supported by a pubic arch. Each set acts independently of the other, except at the menstrual period. There are apparently two sets of bowels and two anis; both are perfectly independent,– diarrhea may be present on one side, constipation on the other.

Myrtle joined Barnum Circus at the age of 13. When she appeared on stage, nothing gave away her unusual condition: apart from the particularly large hips and a clubbed right foot, Myrtle was an attractive girl and had an altogether normal figure. But when she lifted her gown, the public was left breathless.

Throughout her time as a sideshow attraction, she became wildly popular. Eventually, rather than bringing the curious onlookers to her, she began traveling. By visiting small towns and cities and performing for the public, she ended up earning up to $450 a week.

Eventually, famed showman P.T. Barnum heard about her and hired her for his show.

For four years, she continued to work for Barnum and even inspired several other showmen to produce fake four-legged humans for their own shows when they couldn’t get her.

She married James Clinton Bicknell when she was 19 years old.

A year after, she went to Dr. Lewis Whaley on the account of a pain in her left side coupled with other worrying symptoms. When the doctor announced that she was pregnant in her left uterus, Myrtle reacted with surprise:

“I think you are mistaken; if it had been on my right side I would come nearer believing it”; and after further questioning he found, from the patient’s observation, that her right genitals were almost invariably used for coitus.

That first pregnancy sadly ended with an abortion, but later on, Myrtle, who had retired from show business, gave birth to four children, all perfectly healthy.

Eventually in 1928, at 60 years old, she died as the result of a streptococcal skin infection.

On May 6, 1928, her casket was buried and covered in concrete. Various family members stood vigil over the drying concrete until it was set, an extra precaution to prevent grave robbers from stealing her corpse.

After all, several physicians and showmen had offered money for her body, and her family knew that there were people willing to go to great lengths to get one last piece of Myrtle Corbin, “The Four-Legged Girl From Texas.”

NCDC Bill: CAN Cautions Gbajabiamila Against Passing The Bill Into Law

Lady Shows Off Her Huge Lips After Lip Injection