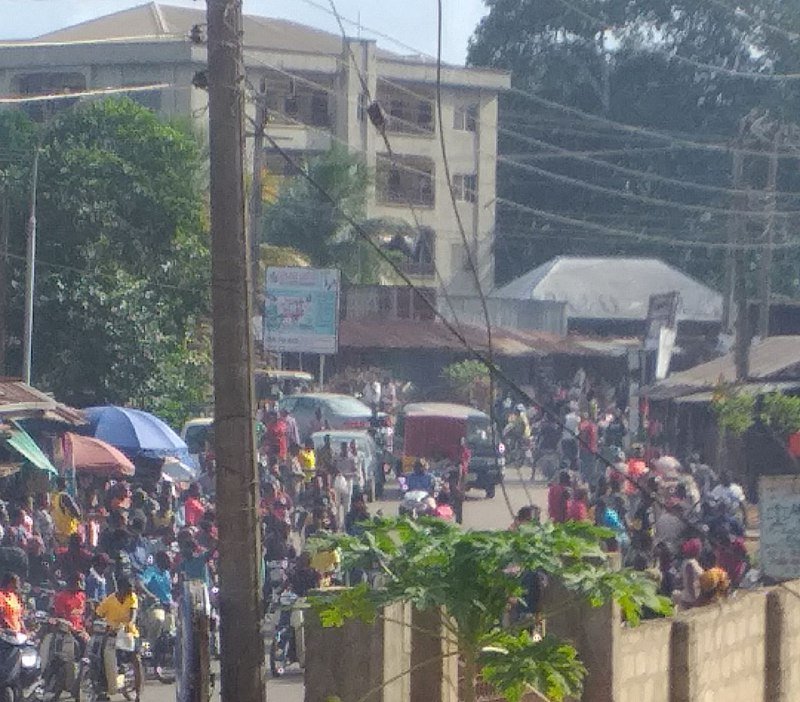 A woman named patience and her granddaughter, Adaeze have been electrocuted today, Monday, 18th May, 2020 at the popular St. Peter Clavers Junction, in Nnewichi-Nnewi Anambra state.

Madam patience who is popularly called Nne Sam sells fried Akara and yam at Junction was friendly with everyone in the neighborhood. Her granddaughter Adaeze started sitting with her grandmother during the lockdown when kids were ordered to stay at home.

The electrocution was reportedly caused by a low EEDC high tension wire that landed on the container where the woman sells Akara and yam.

According to an eye witness who spoke to anaedoonline.com, he said a truck carrying old and used iron rods dragged down the low EEDC wire which landed on the container. “When the incident occurred initially, Patience and her granddaughter ran into the container for safety. Suddenly, the wire started burning on the container and I think that was what affected them” she said.

According to another source, if the wires and poles were not too low, this would not have happened.

Both Patience and her granddaughter were rushed to Rose of Sharon Specialist hospital at St. Peter’s Clavers road, where they were confirmed dead.

According to another source who spoke to anaedoonline.com said “when I picked up the young girl from the container into the car I knew she would not survive because her back tore into two, I could see her spinal cord,”
The source confirmed that the doctor at Rose of Sharon hospital used two different oxygen on both patients on arrival but they were already dead.

The police, EEDC and other security agencies arrived the scene of the incident an hour later.

We spoke to some of her customers, they described Madam Patience as being kind and Jovial. One of her loyal customers narrated to us how they always discussed as friends. She most times sit with her and they talk about her kids who she said lives in Lagos”. Another said, “her yam was a life saver, she goes there every evening and it served as lunch for many. She will be greatly missed“.

In the meantime, her family members who visited the scene of the electrocution and her neighbour’s have been thrown into mourning.