Pregnant Wife Beats Husband Up, Locks Him Up In The House 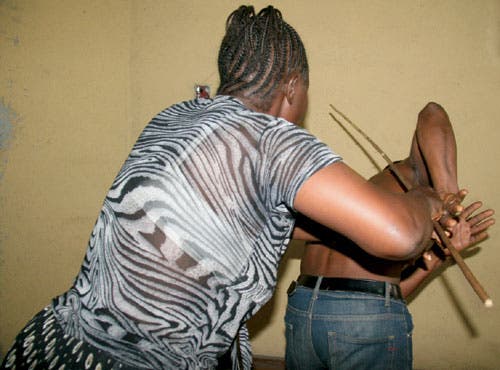 A Nigerian lady has taken to Twitter to narrate on how a close friend of hers, gets beaten by his pregnant wife who also locks him up in the house.

According to the lady identified as Ify on the platform, the wife sometimes seizes his phones and it is getting out of hand already. She however cried out for help on how to save the man

She wrote: Hi people,someone dear to me is in an abusive marriage, his wife locks him up in the house, takes possession of his phones and sometimes uses a belt on him, his wife is pregnant but its becoming alarming. What do i do?

*** He should vacate the house for now cos he might loss his temper one day and try to retaliate. If this goes wrong he can get the wife killed in the process of retaliation.. pls let him leave now

*** Leave his house and go back to his parents house? Or his friends house? Why? I think the best thing to do is to first take her for counselling to either a psychologist or spiritual father whicheva works.Then invite either her mum or urs to come stay with u guys until she delivers

Man Rapes Daughter, Claims They Were Suffering From Dysentery

*** Marriage isn’t by force …..he should leave and find peace of mind cause she might just kill him one day.

*** Ask your friend to get a lawyer and commence proceedings to separate from the wife while things are still redeemable.

See When Domestic Flights Will Resume In Nigeria

Presidency Hits Back At Dangiwa Umar, Says He Feeds On Fake News