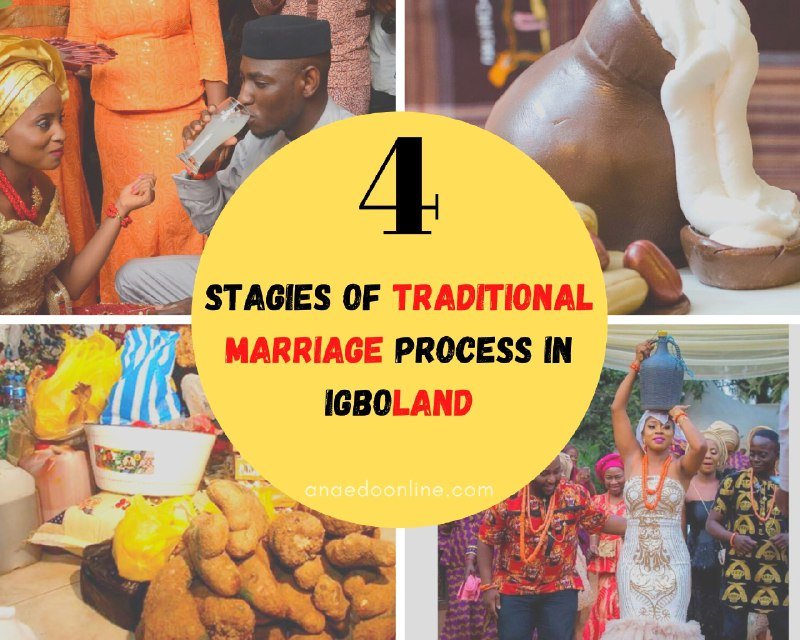 If your man is planning for his traditional marriage, according to Igbo traditional custom, this article is to get you familiar with the process and stages of the customary rite.

Traditional marriage ”Igba nkwu” is an Igbo customary way of marriage. It is the Igbo traditional marriage rites that a groom performs at the bride’s family home in the presence of her family, extended family, and his family as well. It is an affair that joins a man and woman and their families.

It is known that Igbo culture does not recognize the process of a marriage proposal on bended knee with a ring as that signifies western culture ” any man who kneels down to propose to a woman is a compound fool – Pete Edochie”.

In Igbo culture, the family, extended family, and villagers do not recognize a man and a woman as husband and wife even if kids were involved, until a woman’s bride price has been paid.

During the days of our father, traditional marriage is being arranged by the parents of the future bride and the groom.

But in this modern age, young people are free to choose the spouse of their choice, wherever they find love, with their parents’ approval. Every stage about Traditional marriage (Igba nkwu) takes place in the bride’s family and in her compound.

The process of divorce in Igbo land

Ikuaka (inquiry/knocking): is the first process of Igba nkwu in igbo culture. Here the groom goes with his father and few relatives to declare his intention to marry from that family. They are not obliged to come with anything at this early stage but as a sign of goodwill they come with kola nut and hot drinks.

The father of the man usually introduces himself and makes the intention known. In cases where the father of the groom is not alive, an uncle or elder brother does that. The bride is usually summoned by her parents and asked if she knows the groom, the reason for his visit and whether she agrees to marry him.

If she accepts the kola nut brought by the groom, then that gives way for Iju ajuju or Iju ese (Discovery of family background).

The next process includes seeking the consent of the bride’s extended family known as the Umunna: This stage is where the Iju ese or Iju ajuju(discovery of family background) begins. Here both parties go into an inquiry about each other’s family and what is being inquired includes the background of the family, reoccurring issues, if there is any bad omen in the family, healthy history, fertility, divorce traces, family history.

If any of the parties find anything negative, the marriage process has ended. There will be no more marriage traditionally. This is because the party that found out the negativity will no longer be in support, but in cases where the man and the woman are adamant as a result of love for each other (as can be seen in some cases in this modern age) they might choose to do the court marriage.

The court wedding is a western culture and has no correlation with the Igbo traditional marriage system. Then in cases where the discovery went well the second visit is being scheduled.

During the second visit, the groom comes with larger people and gifts like kola nuts, palm wine, beer, dry gin, soft drinks to restate his intention, and seek the consent of the Umunna. Once the Umunna gives their consent as well as the bride (for the second time) then both families share food and drink.

Ugwo isi Nwanyi or Imego (bride price): The bride price is the money paid by a groom to the parents of the woman he has just married or is just about to marry.

This is where the negotiation and payment take place. There comes a lot of bragging from the bride’s family stating their daughter’s accomplishments while the groom and his family continue to beg for negotiation.

At the end there’s always an agreement. The bride price goes very low or high depending on what the bride’s father chooses to take from the groom. In some cases, the father of the bride will not take anything from the groom but advised him to take care of their daughter, as they are all one family.

Traditional marriage list differs depending on the state, village, and community and can be negotiated with the Umunna. They might decide to do it monetarily. The marriage requirement includes yam, wrappers, drinks, chickens, beverages, toiletries, jewelries, kegs of palm wine, bags of rice, food ingredients, soaps, igba “Ichafu” scarfs, wrist watches, umbrellas, etc. Size, quantity and amounts differ according to village, and community as well. The bride price and marriage requirement list is submitted on an agreed day or on the wine-carrying day.

Igba nkwu Nwanyi (the bride’s wine carrying is the final stage of the process of Igba nkwu nwanyi in igbo culture. It is known as a celebration day. It marks the customary wedding party, which is usually done at the bride’s family. Cards are printed to invite people, the bride’s family decorates their compound and the seats meant for the couple.

The couple’s seat is always traditionally decorated with palm fronds, wrappers, and gourds. The bride’s family cater for food, and might even call live bands as well as traditional dancers to make it more entertaining.

If the bride price and marriage requirement is paid this day it is done before the wine carrying. The wine carrying is the major part of this event where the father of the bride pours wine in a cup called “iko” gives it to her to give to the man that she agreed to marry. Her husband to be is hidden in the midst of the invited guest. She dances beautifully holding the cup of wine with smiles on her face as she searches for her husband.

During this process, the invited guest and husband’s friends beckon at her to bring the drink to them but she knows who her husband is so she searches until she finds him and kneels down to serve the drink to the groom. If the man drinks it then that signifies he is the one. The groom puts some money in the cup, dances with the bride to receive blessing from their parents.

After the blessing there comes a lot of feasting and dancing with gifts being given to the couple by friends and family. At the end, the bride goes to her husband’s house. Traditionally, it’s been seen as the first time she is going to her husband’s place.

The Idu uno comes after the traditional wedding. Some communities in Igbo land practice it. This is when the parents of the bride officially visit where the daughter lives.

They set a day aside for it and visit her with lots of gift items to start life and family. Idu uno gives a bride respect in her home. The items includes cooking utensils, bed-sheets, suitcases, boxes, sewing machines, bed, pillow cases, plates, spoons, wrappers, clothes, and even cars and other important things depending on the family’s financial capability. This is done to give the family a head start to reduce expenses for them.

Over 100 Million Nigerians Have No Identity – NIMC

Church, Over 100 Houses Destroyed By Rainstorm