Nigeria Not Winning War On Terror Yet 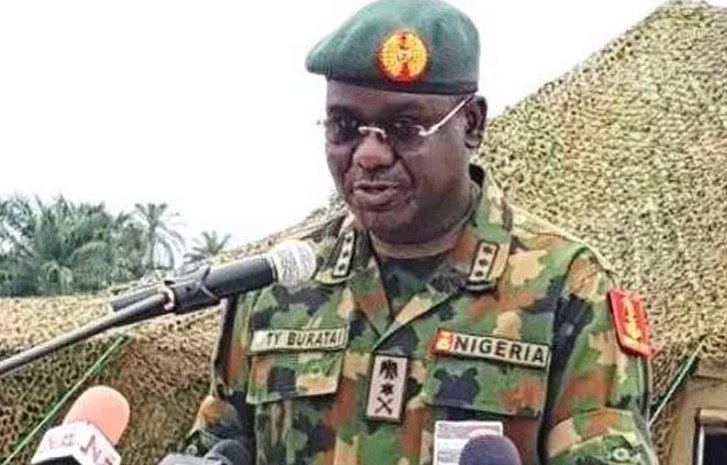 After the latest round of savage killings by Nigeria’s homegrown terror groups, it is becoming increasingly difficult to give a clear and accurate evaluation of the ongoing terror war situation in the North-East of the country.

The seemingly endless war has somewhat been reduced to a propaganda campaign, with the terrorists boasting about claiming the scalps of many Nigerian soldiers, only for the military to counter with stories of how the ranks of the terror groups have been massively decimated.

The disturbing news of the recent massacre of no fewer than 81 civilians at Fanduma Koloram in Gubio Local Government Area of Borno State has come just as the Chief of Army Staff, Tukur Buratai, said that the military had “neutralised 1,429 Boko Haram insurgents” while arresting 116 of their associates.

Shortly before the Gubio attack, there were reports of an attack on a military base in Auno, close to Maiduguri, the Borno State capital, by fighters of the Islamic State West Africa Province, which claimed the lives of six soldiers, while 45 others were declared missing.

Auno was also the gory scene of an earlier onslaught in February by suspected Boko Haram members, who put no fewer than 30 stranded travellers to the sword.

The innocent travellers had decided to spend the night on the road, inside their vehicles, after they were caught up in a curfew imposed by the military to check the movement of the terrorists.

It was a horrific situation as many of the victims were burnt to death inside their vehicles while those who tried to escape were shot dead.

A list of the recent atrocities of Boko Haram and other terror groups will not be complete without citing the slaughter of 47 soldiers in an ambush in March.

Although it was widely reported that 70 soldiers were killed by the jihadists, the military capped the number at 47. According to the military, the terrorists had fired shots at the soldiers, which detonated the bomb they were conveying, leading to their death.

John Enenche, a Major General and Coordinator, Defence Media Operations, said, “They were not killed by the terrorists; they were killed by a bomb explosion because they were conveying bombs.” This toll inflicted by misguided non-state actors is too heavy to ignore.

On many occasions, the Nigerian military and top government officials have boasted that Boko Haram and, by implication, the other terror groups, have been “technically defeated,” but each time this claim is made, it is met with waves of attacks by the terrorists.

This was undoubtedly why a worried Chief of Naval Staff, Vice-Admiral Ibok-Ete Ibas, dropped a bombshell, saying, in just two weeks “we have had over 27 attacks from Boko Haram and ISWAP in the North-East alone.” This does not look like a group that has been “technically degraded.”

What is wrong? The persistent claim by the Nigerian state of having won the war against Islamist insurgents is giving false signal to the international community.

The hard truth is that the war is far from over; it is still alive. Indeed, the Nigerian state has made some significant progress in the asymmetric war.

Boko Haram’s dream of establishing a caliphate has been stalled for now with the swathes of territory under its control reclaimed by the Nigerian Army. Air power has also given the Nigerian state a massive advantage.

Yet, it is quite obvious that aerial bombardments alone will not end the war. There has to be an attitudinal change towards Islamist terrorism. Al-Qaeda and Islamic State groups are working together in West Africa.

The jihadists see an opportunity to drill Islamist values into one of the youngest and fastest-growing populations on Earth. Also, it is not an ordinary war; it is an ideological confrontation that is very difficult to win.

The war has dragged for more than a decade because there are many people who are sympathetic towards the cause of the terrorists. It is a type of war for which the insurgents are more likely to lay down their lives than surrender or make peace.

The movement of these groups into West Africa is aided by weak border controls, experienced smugglers, trafficking networks, and local corruption, Foreign Policy says. In West Africa, terrorists slip seamlessly through porous borders from one country to another.

Also, the war has been politicised. At the slightest opportunity, there have been efforts to “de-radicalise” or grant amnesty to a group of outlaws committing crimes against humanity, even when they have openly rejected offers of amnesty.

These are people behind such dreadful crimes as mass murders and mass abduction of schoolgirls. Nothing could be more demoralising to the soldiers who have continually put their lives on the line to defend the country.

West African countries should fight together to end Islamist terrorism. Foreign Policy warns that terrorist groups are set to encroach further into Togo, Benin, and Ghana. By working collectively and innovatively with neighbouring countries, Nigeria can drastically curb Islamism in the region.

In Chad, one of the countries affected by Boko Haram’s activities, terrorism is treated with absolute seriousness. When Boko Haram members on March 23 killed 92 Chadian soldiers in a seven-hour assault on a military base in Bohoma, the country only mourned for one week.

By March 31, the country had dealt one of the deadliest retaliatory blows to the Islamists. “A thousand terrorists have been killed, 50 motorised canoes have been destroyed,” the military spokesman, Azem Bermendoa, a colonel, told Aljazeera.

But military force alone is not enough. The military needs to strengthen its intelligence gathering to pre-empt whatever the terrorists plan. Beyond this immediate strategy, however, the government should make the environment unfriendly for the terrorist recruitment process.

Beyond the ban on the almajirai, the North-East states should step up efforts to engage the children constructively, especially by providing them education, to ensure that they are not readily lured into terrorism.

JUST IN: Obaseki In Meeting With Secondus, Wike, Tambuwal, Set To Join PDP

Finally, Oshiomhole Reacts To His Suspension, Reveals Next Move