Man Narrates How Houseboy Killed His Wife, Tried To Kill Him 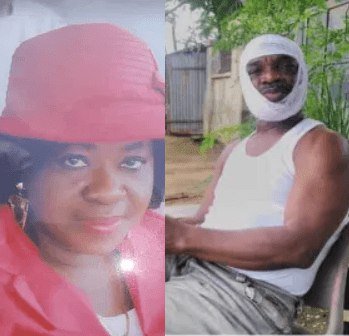 A man has narrated how his houseboy killed his wife on her birthday and also tried to kill him too. Mr Ralph Wilcox, from Bonny LGA in Rivers State, revealed how tragedy befell his family on June 1, 2020.

His wife, Victoria Wilcox, a mother of two, from Arondizuogu, Imo state, woke on that fateful day to mark her 55th birthday, not knowing it was going to be her last day.

At about 8pm, their houseboy named Abdulkareem Babangida, simply called Abba, a native of Kachia LGA of Kaduna State, clubbed Mrs Victoria Wilcox to death with a newly acquired cutlass.

When she was dead, he dragged her lifeless body and deposited it under a tree in the compound then waited patiently to administer the same treatment to her husband, Ralph.

It was revealed that the deceased retired from the Nigerian Housing Insurance Trust Fund (NHITF) in 2005 and started her private business. Victoria and her husband then hired Abba in July 2019 to assist in Victoria’s shop at the Aco Shopping Complex, Lugbe, Abuja, where she used to sell some household items and sacramentals.

Narrating his experience to Vanguard, the widower, Mr Ralph Wilcox, who miraculously survived Abba’s attack, said in tears: “Abba has blown my life away.”

He voiced his concern about coping with life without his soul mate.

Mr Wilcox, who was a Director in the Federal Ministry of Information and Culture until 11th March 2020 when he retired from service, said: “It was about 8 pm that fateful day that I drove in to my compound and he (Abba) opened the gate for me and when I entered, I asked, ‘Abba why is it that there is light everywhere and there is no light here?

“He responded saying, ‘there was an explosion in the metre and that the Mummy was aware, so I decided to switch on the generating set’.

“I told him to give me a few minutes to park so as to check the metre where I asked him to wait for me. When I couldn’t see my wife, I asked, where is Mummy? he replied, ‘Mummy is in the house.’

Wilcox said he went into the house but noticed everywhere was dark and the generator Abba claimed he put on wasn’t supplying light to the house.

He told the publication: “I went in, dropped the birthday gifts I bought for my wife and my Automated Teller Machine, ATM cards and rushed out with my phone.”

At this point, he said he never knew Abba had killed and wrapped his wife in a nylon bag. He said he discovered later that Abba put on the generator to muzzle the sound of his wife’s cries when he was killing her.

Not too sure of what was playing out, Wilcox said he called one Alhaji to come and check out what was wrong with his light but the number did not go. As he faced the metre to find out what the problem was, he heard “the sound of an axe on his head.”

He continued: “He started hitting me and hitting until I collapsed, I fell on the floor and felt thick blood over my head. By then I was weak and when he thought he had killed me, he went inside the house to look for the key of my newly bought Jeep in the house.”

He said while Abba was busy looking for the car key, he regained consciousness and crawled close to his bedroom and started banging on the window in an attempt to get his wife’s attention.

Unaware that his wife was dead, he said: “Mummy, mummy come out, we are under attack, Abba is attacking us.”

According to him, “It was God Almighty that raised me after I collapsed again and battled to draw attention in the pool of my blood.”

He said that after his wife didn’t answer, he gained little strength and crawled again to the gate to seek help, noting that if Abba had started the car then; he would have run over him, and locked the gate.

He said: “If he had succeeded, my corpse and that of my wife’s would be here decomposing and nobody would even know, maybe after few days would start smelling before people will realise that we were dead.

“But God foiled his plan, woke me and gave me the strength to manage to open the small gate because he (Abba) forgot to lock the pedestrian gate as he was locking the main gate.

“That was how I escaped to the road, where I met someone coming with a jeep who saw me and reversed to call security men.”

When the security men arrived, he was already unconscious. The person in the jeep went to get help and when he arrived with other sympathisers, they found Abba, who didn’t know that his boss had regained consciousness and had crawled out for help.

Abba pretended he knew nothing and the concerned sympathisers put the injured widower in the car and asked Abba to drive him to National Hospital. All the while, Abba, while serving his master, had pretended he never knew how to drive.

Abba drove his injured boss and some sympathisers to the hospital. On the way, Wilcox regained consciousness multiple times but was still disoriented. He told Abba on their way to the hospital to call mummy’s phone and inform her that he was under attack.

He said: “It was like I was in a trance. I remember vomiting and dying. The last thing I said was ‘branch to police station and tell them…’ until I found myself in the hospital.”

Wilcox continued: “While in the hospital undergoing blood transfusion in preparation for brain surgery, the news went round the estate and people started coming to visit in the hospital and immediately the first set arrived the hospital, Abba had reversed the vehicle to escape. But when the people saw him they blocked him, and started interrogating him.”

When asked what happened, he claimed they were attacked by armed robbers until he was taken home by 2 am, where the lifeless body of the madam was found under a tree. It was then they suspected Abba had killed his madam.

When subjected to further interrogation, Abba admitted that he killed her.

On why he killed her, he initially lied that they were not paying his salaries as and when due. He later said she was bringing Christian sacramentals to her shop for him, a Muslim, to sell, which he said offended him.

When asked again, why he didn’t resign within the 11 months he was working in his madam’s shop, he said he wanted to kill the couple and sell their car, house and other valuables.

Justifying his wife’s sacramental business, Wilcox said she was selling sacramental because she was a strong Catholic and wondered why Abba would kill his wife for living her faith.

When asked about the whereabouts of Abba, he said he is currently with the police, the State CID, and noted that he had written a petition to the Force Headquarters to inform the Police IGP through the Minister of Information and Culture, who signed it and copied the IGP.

According to him, Abba’s father had reported to the police and was made to visit his son in the cell, while they were still waiting for the Alhaji (Agent) that brought him on a contract basis.

On how the boy was hired, he said, “it was the agent that brought him to us and we signed and paid. But our mistake as people are saying was that we did not go to the police to crosscheck.”

Speaking on Abba’s role in the house, Wilcox said “Abba stayed with us for 11 months. He was Madam’s shop keeper; he wasn’t coming into the house. We had other boys in the house. That week that he committed this crime, he caused quarrel between him and other boys and because of the way my wife took side with him, the other boys got angry and left because of Abba. We did not know he had a plan.”

Wilcox said he noticed a change in Abba’s behaviour weeks before the attack and he mentioned to his wife that “Abba was changing” but his late wife said she trusted him so Wilcox said he allowed Abba to stay because he didn’t want to offend his wife.

He added that his wife was nice to Abba and gave him new clothes and also a gift of 10,000 Naira last Sallah break to give to his parents. He added that Abba’s quarters was well furnished with an air conditioner on his late wife’s demand.

Wilcox wondered what his wife did wrong for Abba to choose to repay his kindness with evil.

Vanguard reports that during interrogation it was revealed that Abba had concluded plans to use the shovel available in the house to dig a grave under a tree in the compound and bury the couple after he must have killed them. He would then take his time to sell all their properties including houses and if anybody asked about them, he would say they travelled abroad.

Though he has taken the situation in good faith, Wilcox said he is not pleased with the slow pace at which the Nigerian police are handling the case and he pleaded with them to give him justice in order to step up plans to bury his wife.

Man Hangs To Death After Attempted Murder Of His Sister