Trouble For Ajayi As ZLP Executives Declare Support For Akeredolu 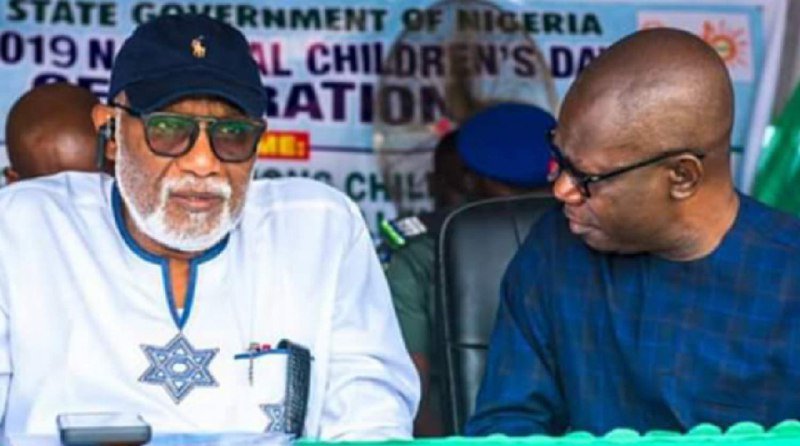 A major setback appeared to have hit the third force in Ondo as over 1,200 members of the Zenith Labour Party(ZLP) declared support for the re-election of Governor Oluwarotimi Akeredolu.

The ZLP has been touted to be the third force to defeat the ruling All Progressives Congress and the main opposition Peoples Democratic Party in the October 10 governorship polls.

Deputy Governor, Agboola Ajayi, has been cleared to contest under the platform of the ZLP. He will be joining the ZLP Tuesday, August 11.

But members of ZLP led by executives from the wards and local government across the state said they have pulled out of the party structure.

Tunji-Ojo said the state has witnessed industrial, infrastructural and other life changing projects across the state.

“He is a key manager of resources and men. He has shown that excellence can be achieved and Ondo state can move forward.

Ondo 2020: You Have 21 Days To Hand Over To Me, Deputy Governor Tells Akeredolu

“Governor Akeredolu has been tested by the people of this state and the people trust him. Regardless of party lines, he has impressed people in terms of excellent performance, and that is why leaders from ZLP have come to declare their support for the Governor.”

State Organising Secretary of ZLP, Hon Femi Ikoyi, said they want to add significant value to the re-election of Akeredolu.

Ikoyi said they were the political engines of ZLP in Ondo State and with their alliances, the re-election of the governor was a done deal.

“We are the political engine of ZLP. Heard someone is coming to Akure. Well if he comes he will meet only the shell.”

Governor Akeredolu assured the ZLP members that they would not regret joining forces with him.

Akeredolu said he was humbled by the huge support he has received from different groups and assured that he would continue to work to improve the lives of tje people of the state.

Reacting, State Chairman of ZLP, Hon Joseph Akinlaja, dismissed the political strength of those he termed former members of the party.

Akinlaja accused Ikoyi and Adebayo of impersonation as according to him, they voluntarily left the party in March.

Akinlaja said he has reported to relevant security agencies.

“Whoever is receiving them in the name of ZLP is wasting time. We have reported them for impersonation. My executives are still intact.

“We replaced them when they said they were leaving. The fortunes of our party will not be affected at all,” he stated.

5 Things You Didnt Know About Jolly-Jolly