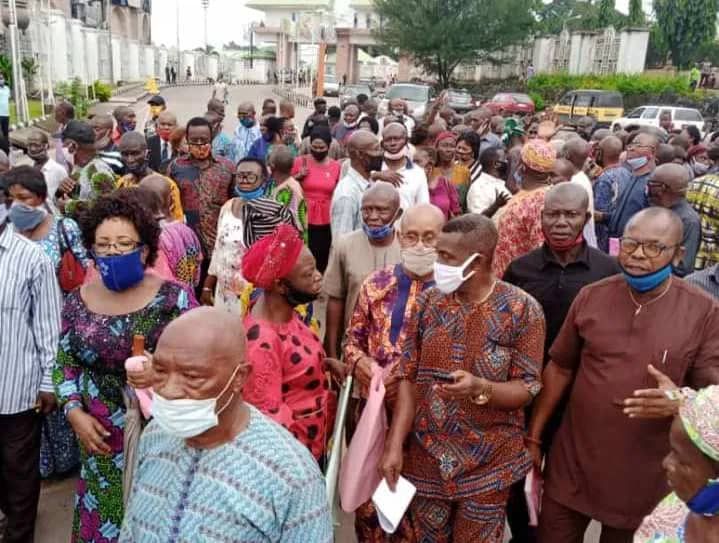 Imo State government is said to have turned a new leaf by resolving to embark on fresh capturing of affected pensioners who were recently omitted from the government paylist.

Information commissioner, Declan Emelumba in a chat with our sources on Tuesday in his office declared that only genuine workers and pensioners will be paid at the end adding that Nigeria Union of Teachers (NUT), Imo State, will bring the list of teachers that are cleared for payment while Nigerian Labour Congress (NLC), Imo State wing has started submitting list of those cleared.

Pension Board will handle that of the retired workers as all those cleared will start receiving their money soon.

He maintained that no true worker or pensioner will be left unpaid this time but “it will take due and gradual process.

Therefore “those who have not received their money should endeavour to exercise patience for the right thing to take place and not put Imo government into confusion by mounting unnecessary pressure.

He further raised concern on the propaganda and negative insinuations sponsored by the opposition group to destroy the image of the ruling party (APC), by allegedly bringing fake workers and pensioners to demonstrate in front of Government House, Owerri, daily.

Emelumba hinted that the automation system must be followed adding that it is no longer going to be business as usual.

Our reporter observed that the fresh capturing of workers and pensioners has started with Governor Hope Uzodinma’s directives.

Those with microfinance problems have been asked to switch over their account to a conventional bank where they can get their Bank Verification Number (BVN).

Those who quickly got their BVN have started receiving alert since yesterday as we gathered.