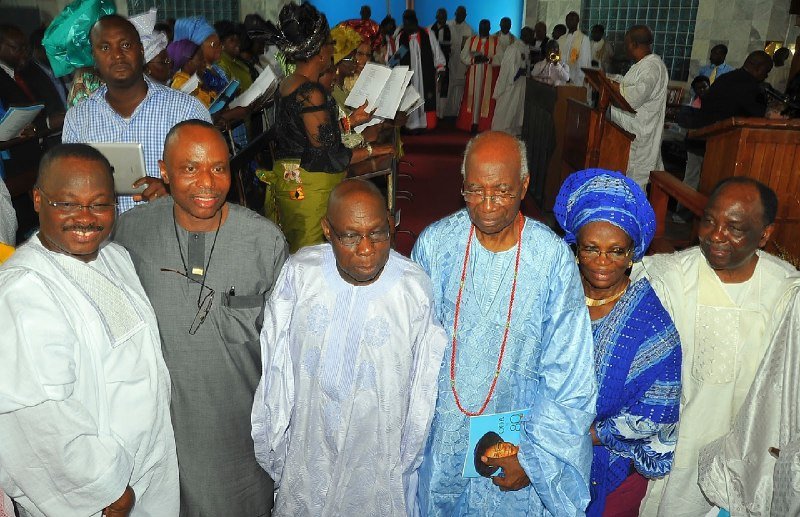 Anaedoonline.ng reported that governors on the platform of the Peoples Democratic Party (PDP) reached out to the former president Obasanjo to convince Mimiko, the leader of the Zenith Labour Party (ZLP) to support Eyitayo Jegede their candidate in the Ondo election.

Recall that leaders of the PDP were reportedly mounting pressure on the former governor of Ondo state to support Jegede, following the opposition party’s victory in the September 19 governorship election in Edo state.

APC: How Mimiko Wish To Return For Third Term

Peoples Democratic Party (PDP) Governors are not leaving anything to chance in their quest to forge alliance with the Zenith Labour Party (ZLP) ahead of next Saturday Ondo governorship election.

Sources in the PDP said Obasanjo met with Mimiko in Abuja but details of the meeting were still kept in the wraps.

A source within the ZLP who also confirmed the meeting disclosed that the meeting was at the instance of Obasanjo, saying the visit of Mimiko to the former president was not unconnected with the forthcoming governorship election in the state.

According to him, some other political leaders across the Southwest region, including two former governors, attended the meeting with Mimiko where they all charted a common front on how to oust the incumbent governor of the state, Rotimi Akeredolu of the All Progressives Congress (APC).

He said the meeting was specifically called to persuade Mimiko to collapse his structures and the ZLP structures with the PDP to strengthen the party ahead of the election, but said the secret negotiations with the former governor were without the knowledge of the ZLP candidate.

He confirmed that the meeting centred around the need to collapse the structure of the ZLP into PDP ahead of next Saturday’s election to confront the incumbent, Rotimi Akeredolu, saying the development became necessary following the dwindling fortune of the PDP in the state while Ajayi and ZLP seem to be gaining grip of the central senatorial districts which is regarded as the stronghold of Jegede.

But some leaders of the ZLP opined that it will be better for Jegede to collapse his structure for Ajayi who is said to have the grip of the southern senatorial district, where he hails from.

The source said “the feelers from the field is not too good for PDP, apart from Akure where Jegede hails from, which local government area can the party boast of winning?

Gov Wike Dares Akeredolu -‘I May Come To Ondo If…’

“The two PDP lawmakers at House of Assembly are currently working for Agboola, and some of Jegede’s co-contestants in the primaries and party chieftains are working underneath for the ZLP.”

It will be recalled that a former spokesman of Atiku Abubakar Campaign Organisation, Mr Segun Sowunmi, on Monday confirmed that there were alliance talks between Mimiko and PDP leaders, and said an alliance with former governor Mimiko should not be foreclosed.

He said PDP leaders in the region and Abuja have been mounting pressure on Mimiko to collapse the ZLP structure into the PDP with a view to defeat Akeredolu, noting that Mimiko remained a key factor in ensuring the collapse of the ZLP structures into PDP and support Jegede.

The sources said Mimiko also met with a PDP northern governor at the weekend.

After the meeting in Abuja, Mimiko flew to Akure to campaign for the ZLP at Ile-Oluji, Ile-Oluji/Oke-Igbo local government.

Mimiko is supporting the candidacy of Agboola Ajayi, the state deputy governor and candidate of the ZLP.

Another source said last week’s Federal High Court judgement that ordered the Independent National Electoral Commission (INEC) to publish personal particulars of Agboola Ajayi might be why Mimiko is going into talks with the PDP.

A former spokesman of Atiku Abubakar Campaign Organisation, Segun Sowunmi, has also told journalists in Akure, that PDP was not foreclosing talk with Mimiko.

He said Mimiko remained a key factor in ensuring the collapse of the ZLP structures into PDP and support Jegede.

Some chieftains of the ZLP were also said to have vowed not to follow Mimiko if he opts to dump the party for the PDP.

The chieftains, who pleaded anonymity, said: “There is no longer trust among the ZLP party leaders.

“Honestly, there is palpable fear in the party at the moment. We are scared that Mimiko may dump Ajayi at the eleventh hours.

“If you have been following the political journey of Mimiko, this should not be a surprise to you. He did this to his former boss, former Adebayo Adefarati (late).

“In 2003, when Baba was seeking his re-election, he was with him in the morning pledging his loyalty but dumped the late governor in the afternoon to join late Olusegun Agagu’s camp.

‘”In 2018, Mimiko declared his intention to contest 2019 Presidential election under ZLP and having realised that his ambition won’t fly, he asked one of his core loyalists, Engr. Gboye Adegbenro, who was already seeking the senate seat under the ZLP to step down for him.

“Due to this antecedent of Mimiko, he cannot be trusted. He is full of wonders. Don’t be surprised he may even align with an estranged friend, Governor Oluwarotimi Akeredolu, SAN if he considers his interest will be protected in the APC family.

“Our fresh fears are real and frightening indeed; when we saw that report about the meeting the PDP governors were to hold with him, he complained to someone that it had been leaked to the press and that he would be in Abuja.

“For us, we are set for anything that will stop Akeredolu, but if as a leader you are negotiating or holding talks without the candidate there, there will be apprehensions and this is real; we are scared simply because since he returned from Abuja, he didn’t say anything about the meeting,” he said.

But Ajayi described the planned collapse of ZLP structure as rumour sponsored by the drowning PDP.

Ajayi urged Jegede to be bold and honest to confess to the general public his campaign was not flying.

He called on the purveyors of fake alliance to discontinue using his name to curry favour from the electorates.

Ajayi, who spoke through his media Adviser, Sowore Allen, said he has never worked with Jegede and would not under any circumstance work with him towards the October 10 governorship election.