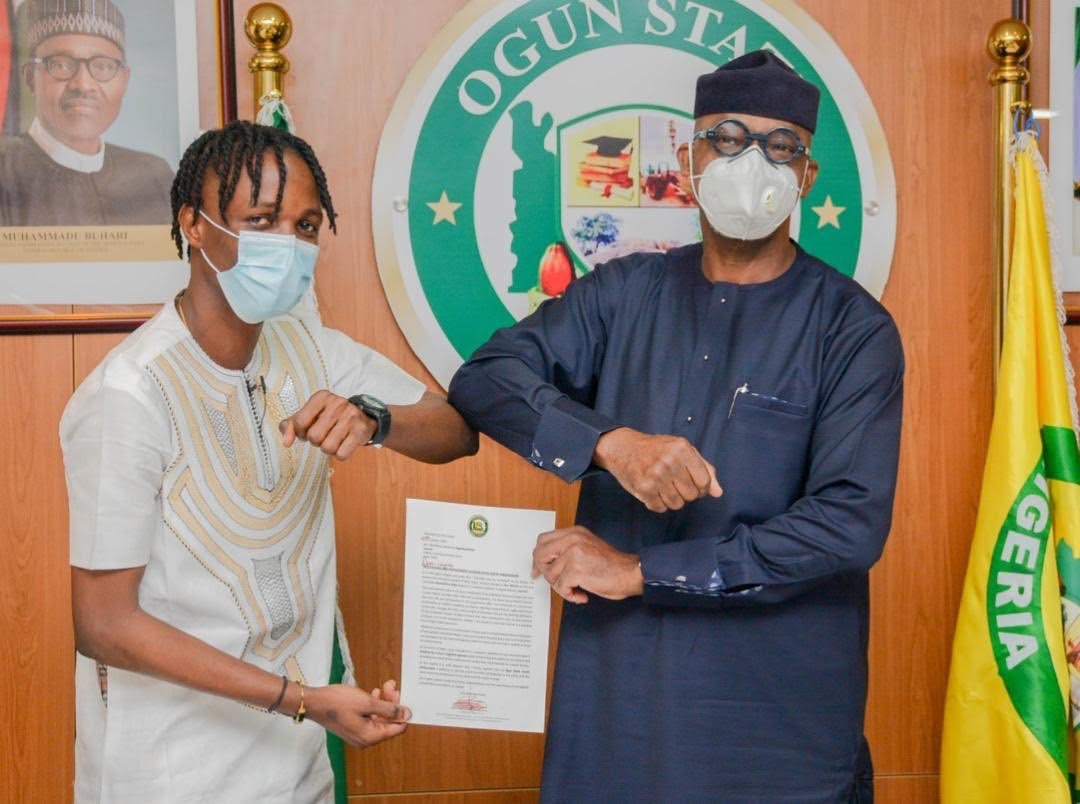 Governor Dapo Abiodun of Ogun State has come under heavy criticisms for giving the winner of the 2020 Big Brother Naija reality TV show, Olamilekan Agbelesebioba, (aka Laycon) a sum of N5miillion and a 3-bedroom bungalow.

Anaedoonline.ng reports that Laycon was in Gov Abiodun’s office at Okemosan, Abeokuta on Tuesday, where he met him and other top government functionaries.

“We have appointed the winner of the Big Brother Naija Lockdown, @itslaycon Youth Ambassador of Ogun State in addition to house and cash gifts.

“I relayed this development today, when I played host to Olamilekan Moshood Agbelesebioba, AKA Laycon in my Oke-Mosan office in Abeokuta.

“The appointment and gifts are a celebration of Laycon’s good character, intellect and virtues which were proven to the whole world on live TV as better choices than vices.

“A proud son of Ogun State, Laycon displayed the essence of focus in the face of temptations and provocations. This is the true Ogun State spirit, and it indeed confirms that this earned him his academic achievement at the University of Lagos.”

But, it appears Ogun indigenes and Nigerians in general, are not pleased with the decision of Abiodun to give Laycon such gifts, especially after winning a grand prize of N85million in the contest.

The statement from the Governor was greeted with many negative reactions as people accused him of misplaced priority.

To some, Big Brother Naija is not a show that any governor should be proud of, as they described it as one that promotes indecency and immorality among Nigerian youths.

It will be recalled that the Ooni of Ife, Oba Adeyeye Ogunwusi, once called for the replacement of BBNaija with a more beneficial programme.

Oba Ogunwusi said the show misrepresents the goodness of the Nigerian youths.

Ogun Governor, Abiodun Under Fire For Underrating Obasanjo Before Buhari

Here are some of their comments:

Funmilayo Ogedengbe-Oresile: “This is totally a disgrace to the Ogun State Government. Do you know how many brilliant citizens of Ogun State are out there suffering, that can’t even get a living? Some are wandering around to get school fees, while some had graduated years ago with good grades but nothing to do as a living. Does it mean education is not the best legacy any longer? Why do we embrace immorality over education? What lesson does the just concluded BBNaija input in the lives of the youth or what impact does it have over the nation? It’s better you look for something doing rather than doing rubbish.”

Oduwole Abdul-Rasaq: “What value does BBN bring to society? With abandoned projects still many in Ogun state, that N5m can do something on J4 to Waterside road.”

Fadhilah Adewunmi: “This is pathetically disappointing. Big Brother Housemates are now the role models the youth should emulate. What moral etiquette has BBNaija taught the youth? Big shame and disappointment to this direction-less governor.”

Aderanti Adebayor: “Mr Governor, please don’t encourage mediocrity and stupidity, rather make credibility and excellence your watchword. Bbnaija is good, but it’s not the best way to encourage viable and productive youths. Be more progressive in your approach.”

Kolawole Fadeyi: “Oga, you better stop your unnecessary wasting of the taxpayers money. All our roads are bad, people are facing hardship in the state. Anyway, the remaining two years will determine your position and history will not be kind to you.”

Chuk Zach: “This is very disappointing, what was the moral or societal benefit of the BBNaija that warranted the winner this state government appointment? I bet you have never given such recognition to best graduating students or those who have even served well in the society. I am totally disappointed. How do you encourage people to study, make research and make life more meaning for all? DISAPPOINTED!”

Eri Arojah: “Hmmmm… Well, if Mr Governor can go to higher institutions to see so many students who are unable to pay school fees, you won’t dash out 5 million to someone that is rich already. Nigeria will always be Nigeria; we are suffering seriously. This is not your promise, Mr Governor.”

Mother Found Dead Next To Her Malnourished Baby

Olubunmi Samuel: “This year overall best students in JETS competition throughout Nigeria were not recognized by the governor despite making the state proud. So it’s those set of people that locked themselves up in a room engaging in every form of immoral acts that can inspire the Governor?”

Taiwo Sulaimon: “What a waste of Ogun State money! You should be ashamed of yourself. You don’t give productive people cash gift. You are a disgrace Mr Governor.”

Adigun Akeem: “BBNaija is now a measure of intelligence. What are we promoting? I’m jealous of his luck but I don’t think this kind of program should be recognized by a government. Mothers start to go and make juju for their children to be chosen for the stupid show.”

Mathew Godspeed: “This is highly unacceptable. BBN hasn’t contributed anything positive to the lives of Nigeria youths, instead it kills our morals. There are hardworking youths out there working ceaselessly for a better future, but you didn’t even bother to appreciate them.”

She Is Not crazy, She Is Fine – Chacha Eke’s brother Comments On Her Outburst

Echezona obinnaJune 18, 2022
Another great offer for you