Young Man Hangs Himself to Death in Enugu 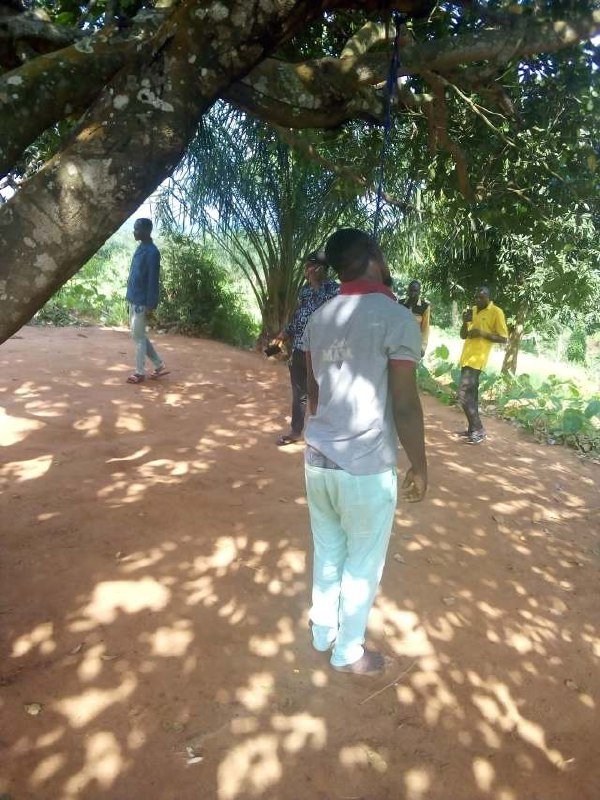 On Monday morning at the hill-side community of Ala Ugbele Obukpa, Nsukka Local Government Area of Enugu State, there was confusion as a 23-year-old boy identified as Ikenna Sunday Eze, allegedly committed suicide, Sunday night.
Though, he left no suicide note behind, one of his younger brothers, Chidubem Eze, mentioned that he gave a hint about his death the night he took own life.

The younger Eze said that the deceased had told his father, Sustainus Eze, to take care of his siblings when he dies, adding that the father didn’t take the statement seriously.

When our reporter probed further about his health status, Chidubem said “He has been having insomnia for sometime now but he has been going about his normal businesses. ”

No member of the family had any problem with him and there was no misunderstanding whatsoever with anybody in the family as to warrant him taking his life.

“When I woke this Monday morning and was about to sweep our compound, I observed that the rope we used in spreading our washed clothes has been cut. ”That was when I remembered what the deceased told my father last night. I went into his room and didn’t see him.

I became afraid and informed the household about my observations. We began searching for him and discovered his lifeless body hanging on a tree, few meters away from from our residence.”

At the scene of the incident, the body of the deceased was still hanging on a cashew tree opposite a hill with his neck already snapped. There was also a stool which he climbed to tie the rope on a branch of the tree before taking own life.

There was also a cutlass he used in cutting the rope from their compound. Some of the residents who gathered at the scene, expressed shock over the development.

A source who identified herself as Chidera, said that the deceased graduated from Paraclete Secondary School, Obukpa, in 2016 and has already learnt a skill of fixing window glasses on residential buildings.

She further expressed surprise over his decision to end own life, adding that we was comfortably fending for himself. “I find it difficult to believe that Sunday Eze is dead. I saw him riding his motorcycle yesterday when I was returning from Sunday mass,” she also added.

It was further gathered that the family hails from Itchi, in Igbo-Eze South Local Government Area of Enugu State, but reside in Obukpa. When contacted, the spokesperson of Enugu State Police Command, Daniel Ndukwe said “An alleged case of suicide was committed by one Ikenna Sunday Eze at Ala Ugbele ,Obukpa Nsukka.

Investigation into the case is ongoing.”