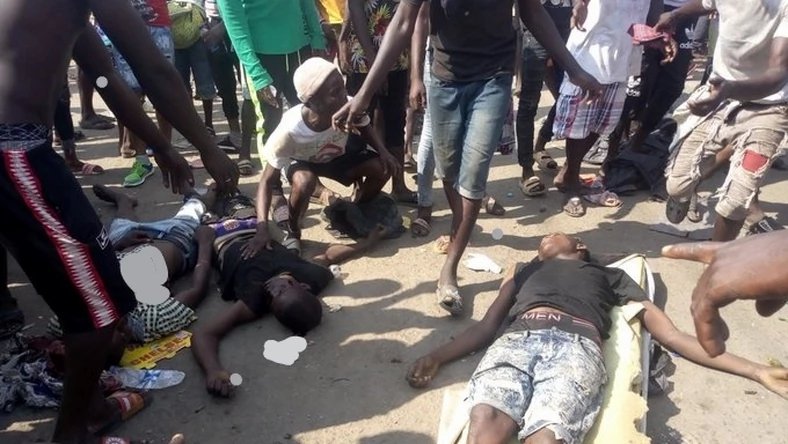 No fewer than 14 persons have been confirmed dead after the Lagos Police clashed with hoodlums at the Mushin area of the state.

The incident occurred on Tuesday, October 20, 2020, when protesters who were on a peaceful march along Agege Motor Road, encountered a police team stationed around Post Office junction, meters away from the Olosan Police Station.

This was also after the governor announced a 24-hour curfew.

An eyewitness told Pulse that crisis broke out when the protesters started hurling projectiles at the officers as they closed in on them.

Officers, led by the DPO of Olosan Police Station, CSP Ayodele Arogbo aka Gbakoje, opened fire on the unarmed protesters.

:”At the time of this report, Pulse can confirm that 13 people have been killed while several others sustained bullet wounds.”

“Let it be known that today, 20th of October, 2020 the DPO Olosan Division, Ayodele Arogbo (Gbakoje) and his boys, murdered 13 People and counting in mushin… #EndSARS.” Tweeded a user.

Some of the people who were injured are currently receiving treatment at the Lagos University Teaching Hospital (LUTH), Mushin General Hospital, and Aishat Specialist Hospital.

Since October 4, Nigeria has been rocked by series of protests with many young people calling for the end of the notorious police unit, SARS and the prosecution of police officers found to have trampled on the rights of innocent Nigerians.

Although the presidency – through the Inspector General of Police – has announced the disbandment of SARS, the protesters have refused to stand down as they continue to block major roads, obstructing free flow of traffic and disrupting business activities.

Over the years, men of the SARS have been fingered for scores of extra-judicial killings, human rights violation, harassment and extortion of Nigerians.

In a statement on Wednesday, the Governor, Babajide Sanwo-Olu says –

“I want to once again, and passionately from the depth of my heart appeal to our teeming youths, to our protesters that you should please give peace a chance.

“There have been several reported cases of arson, and of destruction of properties this morning.