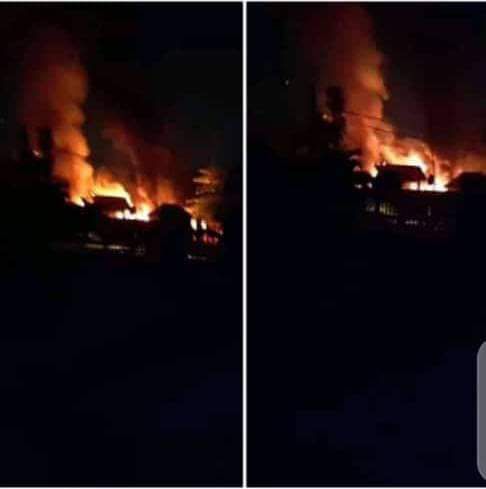 Central Police station (CPS) Nnewi was attacked yesterday, Wednesday 15th October 2020 as some group of unknown persons visited in the wee hours of yesterday night. As confirmed by one of our correspondents, they freed every detained person in the station, burnt some of policemen cars, carted away with some ammunition, seized motorbikes and burnt the premises.

The said attack did not start without some violent display by the people that led the attacks. They stormed the premises with guns as they forced their way in despite police presence. It was said to be an unexpected attack as some of the policemen were caught off guard. This to many is a series of many attacks currently going on in the nation. Only a few days back, they were reports of police stations being burnt in Lagos, Aba and Port Harcourt. To many, the #EndSARS campaign is taking a new tow as possible thugs have hijacked the process to unleash violence.

Only this morning after last night’s tragedy, our correspondent that went to ascertain the cause and the current state of things, met a huge crowd around the scene of the burnt CPS, as lots of stories are being shared amongst people on what transpired. He took out time to ask questions, went into the place and was shocked at the state of the complex. Everything was burnt to the ground as even the security officials are scared as none was seen wearing their uniforms.

On leaving the premises, our correspondent reported an incident of shootings that led to everyone scampering for safety. It was more or less like a shooting to disperse the already gathered crowd in the scene of the fire incident. We also got an unconfirmed report that someone was shot dead along “Traffic light” in Nnewi, a stone throw to the “Razed down CPS.” School children were asked to go back home, even as school only started a few weeks back. Some shops around town were seen be to locked as some traders were seen lurking around their shops as they don’t know the next step. The popular Nkwo Nnewi market, Africa’s biggest motorcycles market is said to be shutdown. Uncertainty also trailed commuters going towards Onitsha route as some people claimed there are cases of broad daylight robberies happening around some section of Onitsha.

To get a balanced report on the fire incident and the attacks that happened at Nnewi CPS yesterday, we tried reaching out to some of the policemen on ground but no one was willing to give an account of what transpired.