Methods Nigerians use to increase birth of twins 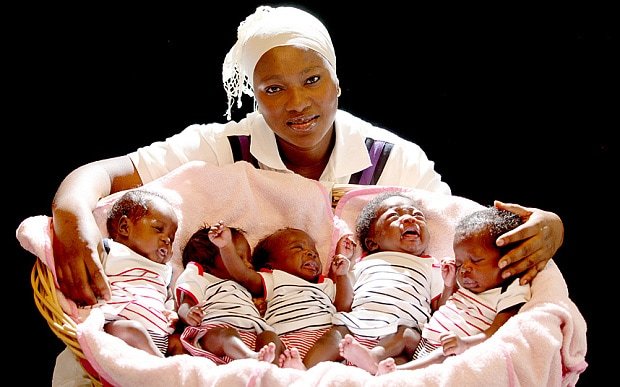 Meet The Black and White Twins

Igbo-Ora, a town 80 kilometers from Lagos, is termed the twin capital of the world: unconfirmed estimates from the town say it boasts of a mind-blowing 158 sets of twins for every 1,000 live births.

Myth says it is a specific species of yam available in Nigeria. Fertility experts confirm that a possible explanation for the high incidence of multiple births in the area could be in the consumption of a specific type of yam containing a natural phytoestrogen, which is thought to stimulate a woman’s ovaries to release eggs from each side.

Africans outside African have less chances of giving birth to twins, this means Africans having a higher chance of twins is suspected to be linked to diet and environmental factors.

Nigerian twins are easily identifiable especially in their young age as they are almost always dressed in matching outfits at least for the first few years of their lives.

While most twin pregnancies are unplanned, having twins isn’t always luck. You can increase your chances of having twins ( or even triplets) if you take certain measures such as the consumption of certain herbs and different sex positions.

To increase your chances of having twins, the male partner should consume Zinc-Rich Food. Zinc-rich foods accelerate the production of sperms.
Taking Folic Acid Supplement although debated, has nonetheless shown some good results while trying to conceive twins. It is advised to take supplements as it’s known to prevent neural tube defects.

Apart from the methods mentioned above, it is widely believed that certain sex positions increase the chances of conceiving twins. There are fertility Supplements and Drugs that enhance conception of twins, these are sometimes called artificial methods.

Tottenham Are Not Title Contenders – Mourinho

Echezona obinnaJuly 19, 2022
Another great offer for you