by AnaedoOnline
in gist
0

Photos of twin brothers with varying skin colors have emerged on the internet and people are finding it hard to believe they are even related. 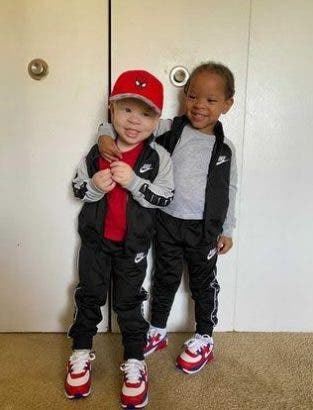 Their mother, Dorian Johnson, from Williamsburg, Virginia, has said that whenever she’s out in public, strangers constantly ask if her African American son, Zavied, is adopted and not hers.

Despite both his parents and his twin brother, Zakari, being black, two-year-old Zavied has snow white skin and golden hair after being born with albinism.

But whilst the adorable twins clearly lookalike, their mom, Dorian, 25, has revealed she feels hurt almost everyday when people judge her ‘golden child’ as an adoptee just because of the color of his skin.

She is speaking out about the ‘everyday racism’ she faces as the black mother of an albino son in the hope of helping to end ‘discrimination’ against children with albinism, like Zavied.

‘When we go to the store, or anywhere in public, people look at them differently and some people ask if my white son is adopted. They ask if he’s really mine and as a mom that really hurts.

‘I take it as a negative reaction, I don’t like it that people are judging him and us just because of the color of his skin.

I do get quite defensive about it, it’s everyday racism and I think it’s a form of discrimination. ‘It makes me angry and upset when people say they don’t look like twins when they clearly do if you look at them properly.

People should not judge how people look and just jump to assumptions.

‘The boys are happy and healthy and that’s all that should matter, people should not judge kids by the color of their skin.’

‘I don’t think people understand albinism properly yet and I think we need to increase awareness that black people can be albino too. I see it as a blessing and I feel very lucky to be their mom.’

Zavied and Zakari were born on February 11 2018. Several days later doctors told Dorian and her partner, Michael Stepney, 28, that Zavied has the most common type of albinism, oculocutaneous albinism.

“I Love My Gay Daughter” – Charly Boy Replies a Critic

Suspects Reveals They Sold Policemen’s Skulls For N1000 Each