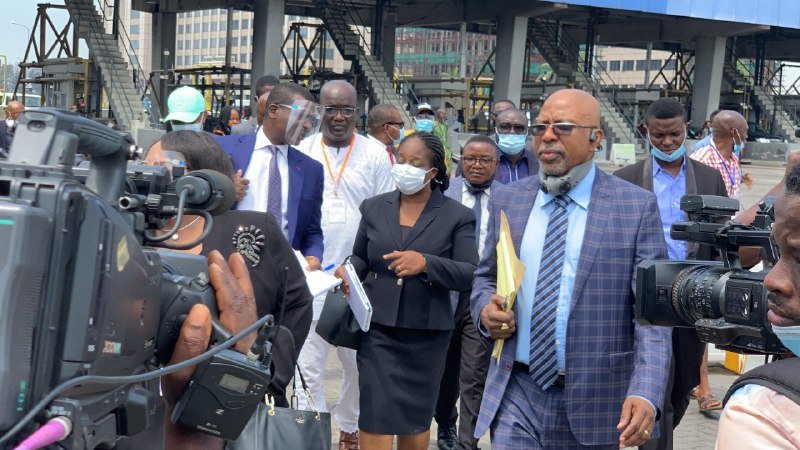 The Lagos State judicial panel of inquiry into brutality and high handedness by the now-disbanded Special Anti-Robbery Squad (SARS) unit of the Nigeria Police Force (NPF) is currently at the Lekki Toll Gate.

The panel is at the scene for inspection and to make more findings concerning the shooting which occurred on October 20, 2020.

Led by the Chairman, Retired Justice Doris Okuwobi, the panel is interrogating Lekki Tollgate officials about the condition of their cameras and other equipment.

The Managing Director of Lekki Concession Company (LCC), Mr Yomi Omomuwansa while taking the panel round the facilities said most of their equipment were damaged as they were set ablaze by hoodlums following the shooting of EndSARS protesters at the toll gate.

Also with the panel during the inspection of Lekki Tollgate is Rinu Odulala and Temitope Majekodunmi, the youth representatives on the judicial panel.

Human Rights Activist, Segun Awosanya popularly known as Segalink is also with the panel on inspection of Lekki Tollgate.

The panel at the resumption of its sitting on Friday sworn-in in the representative of LCC. After consultations with the panel, the LCC rep confirms they have footage of Lekki Shooting.

The judicial panel had its first sitting on Tuesday, 27 October.

The sitting commenced with the swearing-in of Rinu Odulala and Temitope Majekodunmi as representatives of youths on the panel.

Also, sworn-in as a member of the panel is Lucas Koyejo representing the Nigeria Human Rights Commission (NHRC).

The only petitioner taken on Tuesday, Okoli Aguwu explained that he spent 47 days in SARS detention, accused of theft by his boss.

Agwu demands compensation from the Nigeria Police and wants his stolen properties returned.

Burna Boy and Stefflon Don Unfollowers Each Other On Instagram