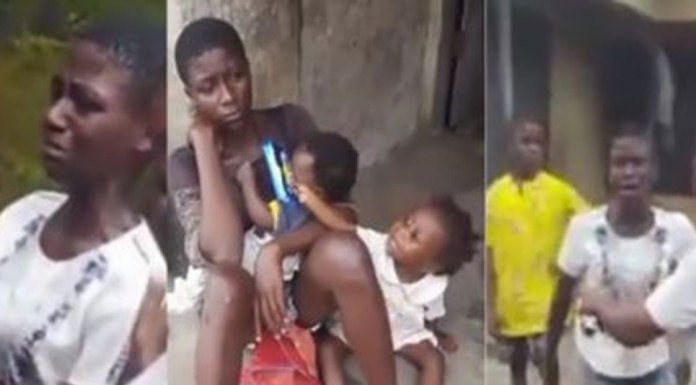 Man abandons lover and their three children, says his mother wants him to marry a university graduate in latest video.

Drama erupted after a young lady who has three children confronted the father of her children after the man claimed his mother has asked him to end their relationship and go and marry a university graduate.

According to the lady, the father of her children and boyfriend has neglected and refused to take care of their children.

A lady known as Vera Onyekwere who posted the video of the moment the distraught lady stormed the family house of the boyfriend on social media wrote;

“She seriously needs help. She gave birth to two children before the kept on treating her bad with poor feeding before then the guy stays in the parents house and later left them with his own mother

The guy is no where to be found the last time I saw him he came back with another woman, I don’t know what he tells them which makes them to follow him

According to her she said she’s tired and her anger is they ain’t asking of her since she left, the guy don’t call or send money for them, the family of the guy don’t care etc

The family of the guy has refused to open the entrance door so the can take the children which laid her to break the down the door, the guys family now ganged and beat her up

Pls don’t mind the noise and my voice na anger I take the video. Please if you are touched pls let’s help her tag prominent people that can equally help

Pity the children, we still have them here cos she left them with anger and they are seriously sick

Read Also: Nigerians React as Student Who Passed Her WAEC Says She Can’t Wait to Graduate

I personally did this video so her voice can be heard. Pls if you can’t hear igbo tell someone to interpret it for her. Pls all the single mothers out there pls let’s help her.