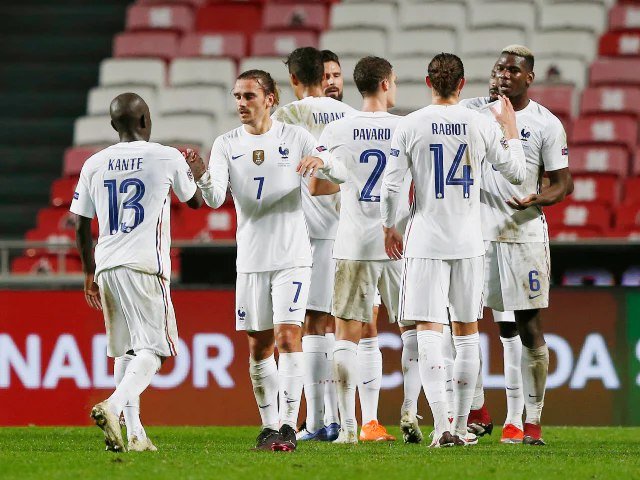 Top meets bottom on the final matchday in League A Group 3 in the UEFA Nations League as France welcome Sweden to the Stade de France on Tuesday evening.

The hosts have already secured qualification for next year’s finals, whereas Sweden will attempt to pull off a monumental shock in their bid to avoid relegation.

World champions France had to overcome European and Nations League champions Portugal in order to guarantee top spot and a place in next year’s finals, and Didier Deschamps’s men did exactly that.

Les Bleus had suffered a shock friendly defeat to Finland prior to their clash with Portugal, but Deschamps’s side rectified those midweek mistakes as they ran out 1-0 winners at the Estadio da Luz.

Les Bleus could not find a way past the seemingly impenetrable wall of Rui Patricio in the Portugal goal, but the Wolverhampton Wanderers shot-stopper was powerless to stop N’Golo Kante notching up the winning goal after he palmed the ball into the Frenchman’s path.

With 13 points accrued from a possible 15, and a superior head-to-head record against Portugal, France have been assured of a spot in the final four after a dominant run in the group, and there is very little riding on this fixture for the World Cup winners.

This will be France’s last game before they take to the pitch at next year’s European Championships, and Deschamps will certainly be looking ahead to next summer’s tournament as Les Bleus bid to go one better than they did in 2016.

In contrast, Sweden must endeavour to defy the odds and somehow claim all three points against France if they are to give themselves the best chance of staying in League A.

Janne Andersson’s men have already witnessed their Nordic neighbours Finland do just that, and Sweden finally managed to register their first points in League A Group 3 when they overcame Croatia 2-1 on Saturday.

Highly-rated Juventus winger Dejan Kulusevski notched up the first goal for Sweden, with Marcus Danielson then bagging the second before his own goal gave Croatia a glimmer of hope in the dying embers of the match.

Nevertheless, Sweden managed to hold on to give themselves a fighting chance of avoiding the drop, but Andersson’s men must avoid defeat against France and hope that Portugal overcome Croatia if they are to climb out of danger and cement their position in League A.

A Kylian Mbappe winner was enough to see France take the spoils against Sweden in their inaugural group game, with the Blue and Yellow winning just two of their last 16 matches against the World Cup champions.

Saturday’s match winner Kante will play no part in France’s final group game after the Chelsea man picked up his second booking of the group stage on matchday five.

Corentin Tolisso and Moussa Sissoko will both be hoping to deputise for Kante in midfield, with Deschamps likely to make a number of changes given the fact that France have little but pride to play for in this one.

Alterations in other areas of the pitch could see Marcus Thuram handed his first competitive start for the national team, with Clement Lenglet and Lucas Digne potentially returning to Deschamps’s starting lineup as well.

Mbappe was not risked for the encounter with Portugal, and it seems unlikely that the Paris Saint-Germain forward will be thrust back into action in this unimportant game.

As for Sweden, Andersson could also make a couple of alterations despite the win over Croatia, with some of their big hitters left on the bench for that encounter.

Albin Ekdal was given his second booking of the tournament at the weekend and will be forced to miss this one out, with Mattias Svanberg, Viktor Claesson and Robin Quaison potentially in line for starting roles.

Sweden overcame France as recently as 2017, and with Andersson’s men fighting for their right to remain in League A, the visitors will be incredibly motivated to march to a historic win.

France have no reason to throw caution to the wind in this game with top spot already guaranteed, but even with a number of changes looking likely, we cannot see Deschamps’s men coming out on the wrong end of the scoreline and expect Les Bleus to confirm Sweden’s relegation with a straightforward victory on Tuesday.