EPL: Draw At Anfield Keeps Man Utd on top Of The Premier League

Sunday Dare who is Nigeria’s current Sports Minister has told the Nigerian Football Federation chiefs to hold Super Eagles coach Gernot Rohr to a high standard so as for him to deliver. 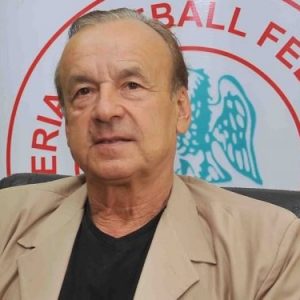 The Sports Minister on Tuesday evening, November 24, called leaders of the Nigerian FA to an emergency meeting in his office in Abuja where they discussed the performances of the Super Eagles.

Super Eagles will be ending the year 2020 without a win for the first time since 1970 after playing four games, drew three and lost one.

According to the report on Complete Sports, Sports Minister Sunday Dare was not happy with how Super Eagles failed to get a win against Sierra Leone in their last two games in 2022 African Cup of Nations qualifiers.

In the first leg which was played in Benin, Edo state, Gernot Rohr and his men allowed Sierra Leone to leave Nigeria with a point before playing a draw in the return leg in Freetown.

The NFF and Sports Minister Sunday Dare agreed in the meeting to beef up the Super Eagles backroom staff with a psychologist, two match readers, nutritionist, and a physical trainer.

“Starting now, Nigeria must demand a higher or better performance from the technical adviser.

We can’t wait until he fails to qualify our team for AFCON and the World Cup before we start to ask the tough questions.

In this respect, I charge the NFF leadership to immediately take necessary steps to protect our football fortunes working with the MYSD.’‘

EPL: Draw At Anfield Keeps Man Utd on top Of The Premier League