Manchester United manager, Ole Gunnar Solskjaer, has said he is not taking their qualification for the Champions League Round of 16 lightly. 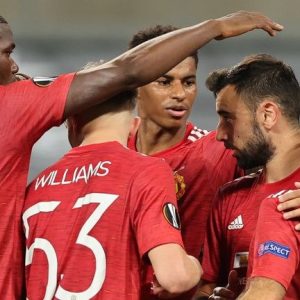 The Red Devils are yet to book their place in the knockout stages despite a 4-1 win at home against Istanbul Basaksehir.

Bruno Fernandes’ brace gave them a comfortable lead in the first, before Marcus Rashford and Daniel James added more goals.

The result means Solskjaer’s side only need one point from their final two matches to qualify.

But next week’s home game against Paris Saint-Germain and the trip to Leipzig means the manager is not getting ahead of himself.

“We’ve got nine, two on six points (PSG and RB Leipzig) and Basaksehir on three, so we still need points to go through.

“One probably should be enough and three probably gives you the win, so hopefully against PSG we can secure the points we need but that’s another matter.”

Ike: Why My Relationship With Mercy Eke Crashed

“Only Broke Girls Date More Than One Guy” — Rapper Erigga

I Don’t Have Money But I Have You – Mr. Eazi Tells His Girlfriend, Temi Otedola (Video)