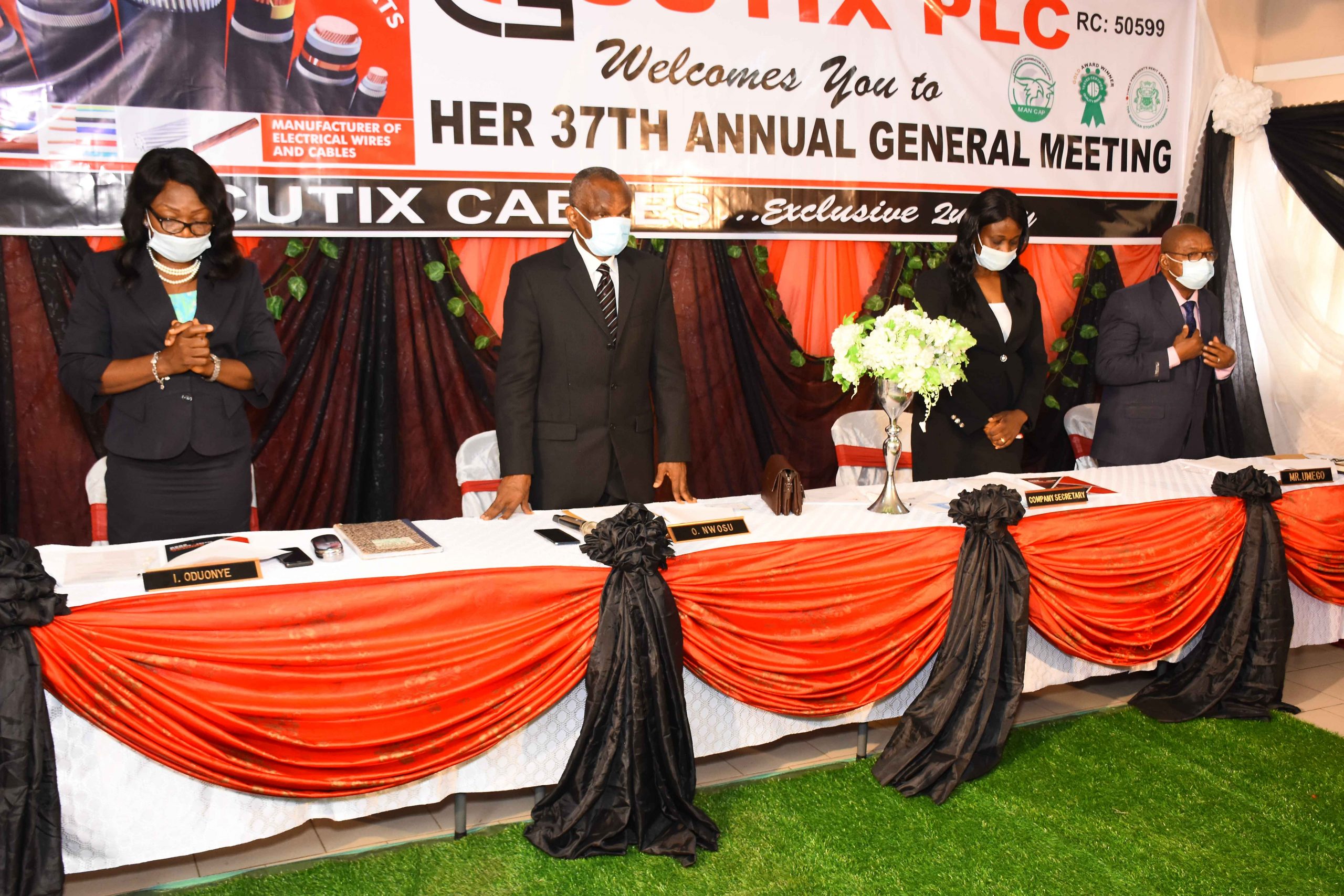 It was a tough financial year for many companies due to the outbreak of the Covid-19 pandemic which affected many organizations. Cutix Plc was not left out as its revenue was hit by an 8% and 14% decline in Turnover and Profit Before Tax respectively when compared to the financial year 2019.

This was disclosed in a statement by the Chairman of the Company, Amb. Okwudili Nwosu, at its 37th Annual General Meeting (AGM), held at the Company’s head office, 17, Osita Onyejianya Street Umuanuka, Otolo, Nnewi, Anambra State on 27th, November 2020.

In respect to the Covid-19 regulations and guidelines, the meeting had in attendance, not more than twenty people physically present including some Board members, a representative each of the external auditors and Statutory Audit Committee, Securities & Exchange Commission, and nominated proxies.

The representative of the Nigerian Stock Exchange monitored the meeting virtually. Board members present at the meeting are the Board Chairman – Amb. Odi Nwosu, the Chief Executive Officer – Mrs. Ijeoma Oduonye and Sir Matthias Umego with the Company Secretary – Mrs. Chinwendu Nwokporo.

The meeting was declared open with an opening prayer led by the Founder of the Company, Engr. Ajulu Uzodike (OON), followed by the Chairman’s address. The meeting proceeded with the ordinary business of the day which includes receiving of the Audited Financial Statements for the year ended April 30, 2020; Declaration of dividend; Election/re-election of Directors; Appointment of a new External Auditor; Fixing of remuneration of auditors and election of Statutory Audit Committee members. Special business of the meeting includes Approval of Directors’ remuneration and Amendment of Articles of Association of the Company to allow for virtual meetings of the Board.

Directors that were re-elected at the AGM are Amb Odi Nwosu, Barr (Mrs) Ifeoma Nwahiri, Dr. Chidozie Nsoedo, and Sir Matthias Umego.  Mr. Ike Okonkwo, Mrs. Ijeoma Ezeasor, and Mr. Ariyo Olushekun were elected as new Directors of the Company. The votes already cast by way of proxy were added to those cast by shareholders that were physically present at the meeting and the Registrar announced the result on each business before the results were declared by the Chairman.

Furthermore, election for members of the financial year 2021 Statutory Audit Committee was conducted and Chief Edmund Njoku, Mr. Chima Nwosu, and Mr. Jude Okpala were elected as shareholders representatives while Dr. Chidozie Nsoedo and Mr. Ike Okonkwo were elected to represent the Board in the Committee. The firm of Ngozi Monica Okonkwo & Co was appointed as new Auditor for the Company to replace ANOC Professional Services that retired at the meeting.

The meeting ended with a closing prayer led by a shareholder, Chief Christopher Nzewi.

Anambra 2021: NSA Monguno Issues Warning To IPOB Ahead of Election

Reactions As Tonto Dikeh And 2face’s Babymama, Pero Spotted Together