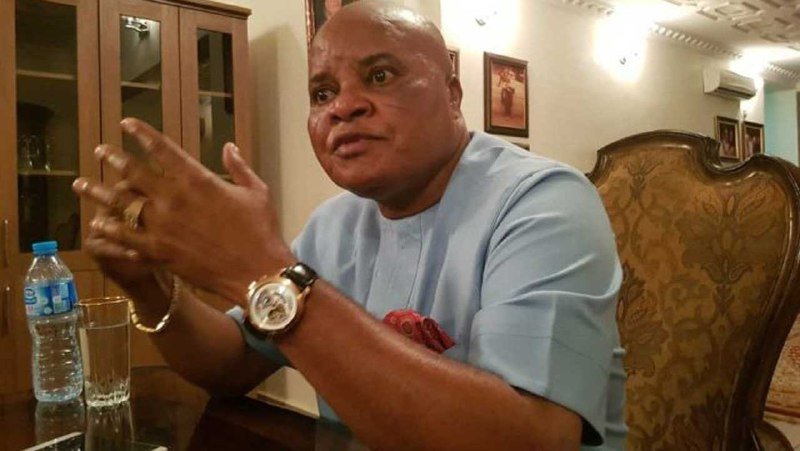 The speaker of Imo State House of Assembly, Paul Emeziem, alongside nineteen other members from APC extraction have described the activities of Senator Ifeanyi Araraume after the December 5th Imo North bye-election as anti-party and demanded that an immediate precautionary measure be taken on him by the party.

The lawmakers’ take was contained in a communiqué signed by twenty of them including the immediate past Speaker, Chiji Collins at the end of an emergency meeting on Monday.

They berated the former Senator for directly attacking the state Governor, Hope Uzodinma with every unprintable language when he (Araraume) granted a press interview to AIT on Sunday.

The communiqué reads, “it could be recalled that shortly after the Saturday, December 5th, 2020 Okigwe senatorial bye-election, Senator Ifeanyi Araraume while reacting to the outcome of the election, accused the Governor of instigating his followers to vote for the Peoples Democratic Party, PDP, alleging that the Governor’s action amounts to anti-party, hence should be sanctioned by the party.

“But we view the former Senator’s accusation as a direct attack on all of us, our great party, APC and of course, the entire members of the party.

“Also, we consider the action of Senator Ifeanyi Araraume as one that has necessitated sanctions from the party, as Imo APC does not need an unstable character and serial liar who would continue to thwart efforts to move the party forward in the state.

“For the records, if what Senator Araraume said is true, how come all lawmakers from Okigwe zone and party leaders delivered their booths for APC in the state.

“We all know the political history of Senator Ifeanyi Araraume in the state. How he has been jumping from one party to another; from PDP to APGA and to APC. In all these periods, he was busy causing troubles and confusion in the parties. So we are not surprised that today, he has taken to blackmail Distinguished Senator Hope Uzodinma.

“We can’t imagine how such a person who can tell unfortunate, unfounded and malicious lies against our Governor will represent a zone as a Senator of the Federal Republic.

“We urge the state Executive of the party to, without further delay, put up a disciplinary action against him and even his ward, Osuachara in accordance with the constitution of the party.

“We also recommend his expulsion from APC because we have noted with confirmation that he is a troublemaker and not the breed we want in the party and also for the growth and progress of APC in the state.

“We further reiterate our unalloyed support to the party, APC, and Distinguished Senator Hope Uzodinma and his administration in the state.

“We, however, urge all genuine APC members to dissociate themselves from Senator Ifeanyi Araraume and his anti-party activities in the state. We at the same time advise Imo people to disregard Araraume’s tantrums and antics, and remain committed with their support to the visionary leadership, policies and programs of Governor Hope Uzodinma for the overall interest and betterment of the state.”