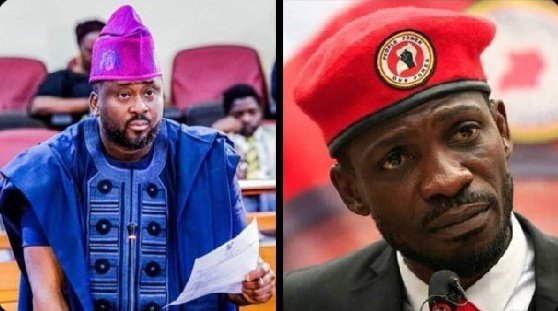 A Twitter user @VictorIsrael_ had compared Mr Wine to Desmond on Friday.

He said, “Truth is Nigerians wish they could have their own young and Vibrant Bobi Wine but the last time they gave it a thought, it resulted in Desmond Elliot.”

Things quickly took a turn as his tweet did not sit with so many people.

It's a total disrespect to Bobi Wine to be compared to Desmond Elliot. One is patriot, the other is idiot pic.twitter.com/dKukIhxSHM

It’s disrespect to Bobi Wine, when you compare him with Desmond. There should be no comparison

Because Bobi is a patriot, the other one is an idiot

Let’s not compare Bobi Wine with Desmond Elliot though. It’s a huge disrespect to Bobi Wine. If we are being very honest.

One is a patriot, the other is an idiot.
You know who is who.

Truth be told. Bobi Wine is not to be compared with Desmond Elliot

Desmond deactivated his Twitter account and took a break from Instagram and Facebook after the storm that greeted his statement that there may be no Nigeria in five years if social media is not regulated.

The Surulere rep argued that social media was used to spread fake news, disinformation and violence, including an attack on the Oba of Lagos, Rilwan Akiolu, during the protest.

“The curses, the abuses from children, and I asked myself ‘Is this Nigeria? What is going on? Children cursing?’ People have the effrontery to enter an Oba’s palace, hold the staff of office, culture is gone. Mr. Speaker in the next five years there will be no Nigeria if we don’t start now,” he said.

Desmond Elliot Apologizes To Nigerian Youths For Calling Them Children

He is also a singer and an actor.