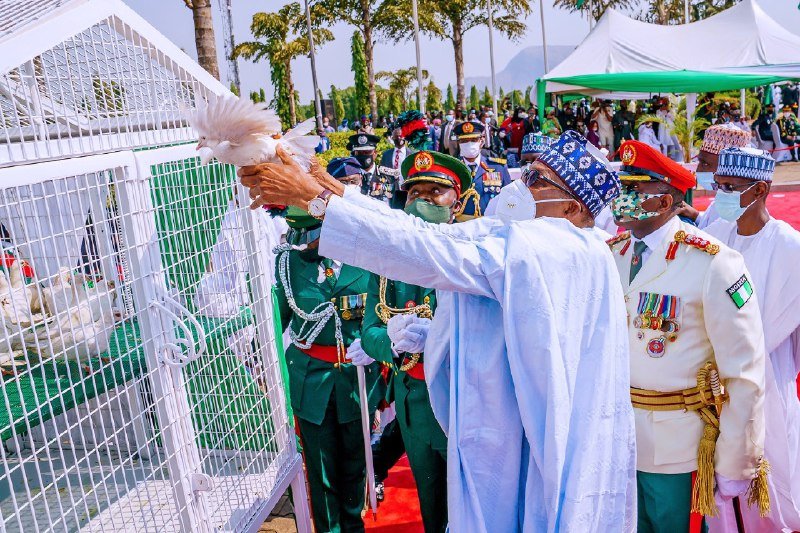 The doves refused to fly despite multiple attempts by the President thereby sparking a debate on social media on Friday.

The President had opened the birdcage at the National Arcade, picked up one of the doves, and thrown it into the air but the bird landed atop the cage and refused to fly.

Buhari, who was eager to let the white pigeons fly, opened the roof of the cage in a bid to send them all out but the birds remained adamant and decided to sit on top of the cage’s roof.

The President, who appeared tired of trying, soon left the birds and returned to his seat. Moments after the President had left, however, some of the birds flew.

The ritual of releasing doves is to commemorate the life of a departed loved one and is common at significant events like funerals or memorials. It also signifies peace.

Studies show that domesticated doves which are used to living in cages are not always keen on flying.

The Vatican stopped the ritual in 2014 when Pope Francis released two birds that would not fly out of the window of the papal apartment and required several attempts to get the birds to fly out over a crowd of spectators.

A similar incident occurred just the year prior at an event where Pope Benedict XVI released doves during a Holocaust remembrance event. The doves were attacked by a gull, with one dove being singled out and injured, according to Wikipedia.

In 2014, the doves refused to fly when former President Goodluck Jonathan freed them. The Spiritual Director of the Adoration Ministry Enugu, Rev Fr. Ejike Mbaka, described the incident at the time as a sign that God had abandoned Jonathan.

The refusal of the birds to fly on Friday, however, sparked thousands of comments on social media.

A former presidential aspirant of the All Progressives Congress, Adamu Garba, said the birds should be eaten if they cannot do what they were trained to do.

“The pigeons are tired and overtime became lazy, they don’t want to fly the spirit of The Nigerian Flag. We should roast them at Suya joint and deploy Crowwe for action,” he said.

Social media personality, Morris Monye, said the Department of State Services would have arrested the pigeons for embarrassing the President if they could.

“I guarantee you… If it was possible, the DSS would arrest the pigeons for such an affront on the President. But really, is there peace, harmony, and security in the land?” he asked.

A former Minister of Education, Oby Ezekwesili, who is a known critique of the President, also tweeted,

“Hmmm. Even the pigeons in Nigeria.”

Watch the video of Buhari and the pigeons below:

“I Am The No 1 Runs Girl In Nigeria, Big Men Food Only!!” – Bobrisky Brags

Aisha Yesufu, Fani-Kayode, Others React To Pigeons’ Refusal To Fly