HOW THE PRINCIPAL GODDESS OF ỌBỤKPA- NNEỤMỤ-NKWOME CAME TO BE 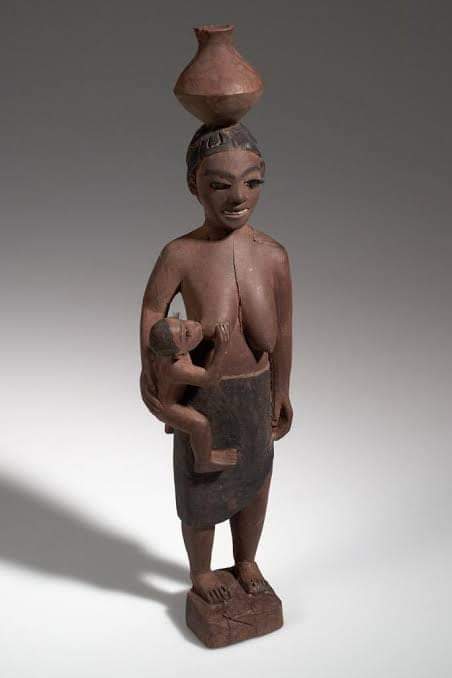 In Ọbụkpa, there stood the temple of a goddess called Nneumukwome, the goddess Ọbụkpa ancient historians attribute the founding of the town to. The story of how the female deity came to be have remained a strong mystery. Many chose not to say anything at all about the origin of the goddess but throughout the length and breadth of Obukpa, the mention of the name Nneumu-kwome evoked instantly an image of a caring mother with many breasts and two children clinging on her body and feeding themselves with the milk supplied by her breasts. They said that Nneumu-kwome was the mother of Obukpa and that she carried Obukpa people in her arms as a mother would carry her children and also offered them protection and providence.

Many stories abound. Some said the deity was married to the first Obukpa man and that they gave birth to three children – Ejuona, Owerre and Obige – according to their seniority. And so, the three sons of Obukpa and Nnene (For that was what Nneumu-kwome was fondly called meaning ‘beloved mother’) started giving birth to sons and daughters making up the present Obukpa of 46 villages. Some said that Obukpa migrated from Idah, the northern side where the River of rivers passed across.

Stories have it that Nnene came from nowhere in particular (some say Idah) and located Obukpa down to where it was presently situated and pitched her tent with them because right from time immemorial, she had been assigned by Ezechitoke, the God of creation, to take care and watch over the descendants of Obukpa.

She had been staying with Umuorua people. Obukpa ended at Umuorua at the time, sharing boundaries with Ibagwa-Ani in the East and Ibagwa-Aka in the North. Nnene had decided to relocate to Owerre where Obukpa began. She always walked and appeared as a beautiful maiden. She moved eastward to Ogwashi village with a calabash and asked for water to drink. The eldest man of the village, Onyishi, not knowing who she was, reprimanded and scolded her. She then moved to the next village, Ngboko where the Onyishi was kind and gave her water to drink. She thanked him and promised him that the village would lack no water until the end of time.

Right there in the presence of Onyishi Ngboko, the earth opened her mouth and water came out, the water that never ran dry. There were different openings of the earth here and there which served as springs. But the stream never flowed. It was just there to serve Obukpa and Obukpa alone. That stream was called “Nneumu Stream,” Iyi Nneumu. The earth was also said to have opened and she went in and dwelled with the Ngboko people who showed her hospitality. An anthill sprang up at the exact spot where she went in. There became her shrine as other erected clay huts came to be seen scattered around the anthill without the making of any man. It was discovered through divination that the mother of the town state had come to dwell with them. That was in the valley of the Nneumu hill. She is worshipped there up to date.

On whether the hill came before Nnene or whether Nnene came before the hill still remained an object of speculation but one thing remained certain – there was no river that passed through any part of Obukpa except the stream. No single water to quench their thirst during the dry season. Some said it was because of this that Nnene came and caused the earth to open her mouth and provide water for Obukpa people in that valley close to her shrine. It was not a flowing stream per se.

What was obtainable was that there were ponds here and there – up to nine – that supplied water to the people. Each of the ponds was surrounded by rocks down to the inside in such a way that one had to descend a bit with one’s vessel in order to draw water. You could as well bend down and scoop water with your clay pot.

Each of the ponds had different names. The first if you came from the North was called ‘Ogbudele’ (Killer of Vulture), then the most calm of them all, “Akpoti” was just some distance away. On the left side of Akpoti was “Iyi-Orba” (Orba stream) which served Orba people. It was the first stream if you came down from the hill in the east.  Another was “Iyi-Esato” and so many others. You could go inside any of them to scoop out your water. The one that many feared was Ogbudele. It always attempted to swallow people it was murmured. But history had never recorded that anyone had been swallowed by the stream.

They kept saying: “Nnene is not like other gods – she does not eat her children.” The rocks inside each of the streams supplied the water. The stream was enclosed inside a forest and that made the place dark and scary with the chirping of insects like “chichikpokpo” that usually signalled the advent of night.

During the dry season, people from the three corners of Obukpa would come with their clay pots and calabashes to fetch water and quench their thirst, clean their bodies, make their clothes neat and the mothers would use that to cook for their children, the children of Nnene; for Nnene would not allow her children go hungry. The streams never run dry; it was always there to quench their thirst.

NB: The photo attached to this post is not that of Nneumukwome but taken online for illustrative purposes.

ANAMBRA: Ex- Commissioner’s Wife Calls For Rescue Of Her Husband