by AnaedoOnline
in Politics, Trending Now
0

Femi Fani-Kayode, former minister of aviation, has dabbled into the lingering feud between Governor Bala Mohammed of Bauchi state and Rotimi Akeredolu of Ondo.

"We must choose our battles wisely & know who our real enemies are. I have disagreed with my friend & brother Gov. Bala Mohammed on several occassions over the years & I do not share his views on a number of issues but to describe him as a terrorist is uncharitable & absurd.1/

The two governors have been engaging in open media confrontation over the ethnic tension and insecurity in the southwest region of the country.

The confrontation started when Bala justified the carrying of AK-47 by herdsmen, a controversial statement Akeredolu described as one capable of fuelling ethnic tension. 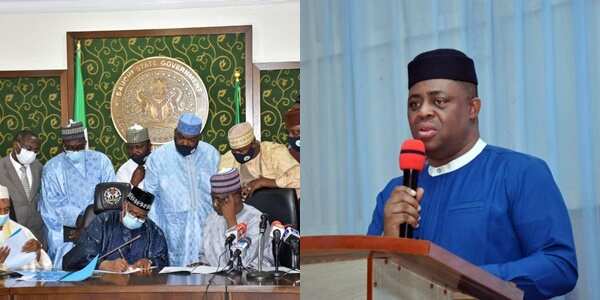 Making his position known on the ensuing feud in a tweet on Monday, February 22, Fani-Kayode said though he disagreed “on several occasions over the years” with Bala, he will never subscribe to the opinion of people calling him a “terrorist.”

Read Also: How Gov. Uzodimma Settled All The Feud With Imo NLC

The former aviation minister described as “uncharitable and absurd” the name-calling criticism in which the Bauchi governor is being faced with. He called Bala a “man who stands up for southerners, middle belters and Christians as much as he stands up for Northern Muslims.”

..in carrying guns, throwing bombs and killing people. It would serve our interest better if we learnt to separate the wheat from the chaff and stop demonising people simply because they do not share our views. 6/

FFK also stated that if not for Bala, Goodluck Jonathan would not have emerged as president of Nigeria after his former boss Umar Musa Yar’adua passed away.

In a statement, an aide to Governor Bala said the comment of his boss was misunderstood and misrepresented.