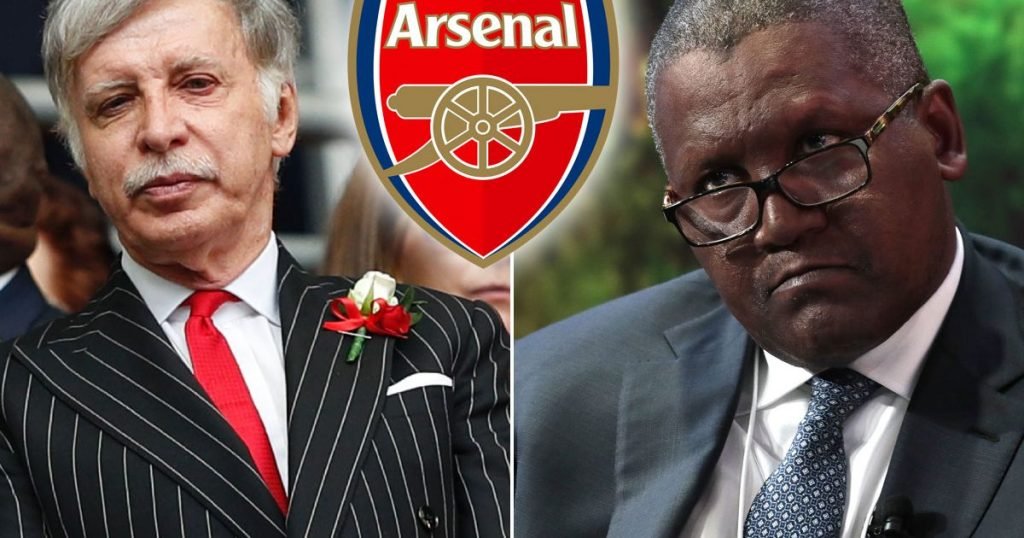 Aliko Dangote has been out of the spotlight when it comes to Arsenal Football Club in the past year.

That is not entirely unexpected, given the coronavirus pandemic that has swept the globe.

However, according to football.london, talks over a potential takeover at Arsenal could start up in the not too distant future.

Dangote, who is the richest man in Africa, has made no secret in the past of his desire to buy out Stan Kroenke at Arsenal and become the owner at the Emirates Stadium.

Elumelu Is Giving Voice Of Hope To Millions Of Youths – Dangote

In June 2015, Dangote admitted he was interested in buying Lady Nina Bracewell-Smith’s 15.9% stake in 2011, which were eventually purchased by Stan Kroenke.

In September 2016, he stated that a takeover would be a question of timing rather than money.

In August 2017, he mentioned the conclusion of the oil refinery as the key time, saying: “I don’t want to go after Arsenal until I deliver the refinery. Once I deliver, I will go after Arsenal.”

He reiterated that in January 2020.

“It is a team that yes I would like to buy someday, but what I keep saying is we have $20billion worth of projects and that’s what I really want to concentrate on. I’m trying to finish building the company and then after we finish, maybe some time in 2021 we can.

Dangote is the 206th richest man in the world according to the Forbes Rich List, with a net worth of $11.8billion and has openly stated that the conclusion of his oil refinery in Lagos, Nigeria would be the time when he would think about Arsenal once more.