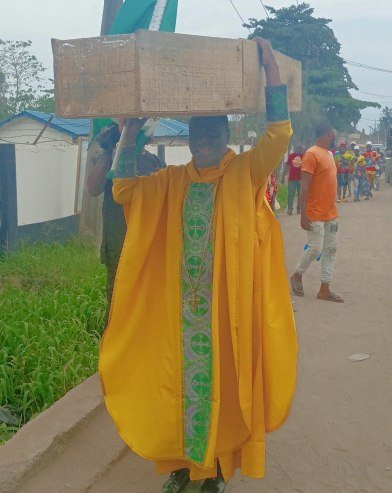 The general overseer of Resurrection Praise Ministry, Archbishop Benjamin Mustapha has shown his displeasure in the present administration by carrying a coffin on the streets of Lagos.

The man of God during this procession made it known that God instructed him to carry the coffin as a symbol, just like he did to the prophets of olds to speak to the seat of power.

He made it known that God is angry with the present government because they have gone against His will to inflict hardship on the people of God.

The victim, who is a lecturer in the Faculty of Humanities at the Imo State University, is a native of Avuru Community in Ikeduru council area.

He was said to have been on transit from Enugu to Owerri when the incident happened.

Drama As Woman Twerks On Top Of Half-Opened Coffin (Video)

According to a resident of Okigwe town, the cleric was driving when the gunmen accosted him.

The gunmen were said to have shot sporadically into the air to force him to stop.

Imo police spokesperson Orlando Ikeokwu could not respond to enquires from The Nation as his phone line rang out without answer.

Government Announces Total Lockdown For One Week, See Date It Will Commence