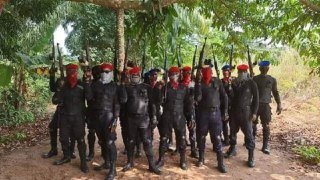 In the massive struggle, The security outfit of the Indigenous People of Biafra, Eastern Security Network, has released a picture of a suspected Fulani terrorist killed during the violence which has engulfed Umuogudu Akpu-Ngbo Community in the Ohaukwu Local Government Area of Ebonyi State since Monday. Gathered from SaharaReporters, sources in the community noted that the deceased was one of the militants that stormed the community to allegedly carry out a reprisal but were killed by the ESN operatives.

One of the sources claimed that Fulani herdsmen are among those fuelling the crisis in the Ebonyi communities. “This is one of the Fulani terrorists that came to attack the Ngbo community in Ebonyi province on Monday. Despite the charm tied around his waist, the gallant ESN operatives still sent him to face proper judgment.

“God bless ESN operatives forever. The ESN is our last hope since Governor Dave Umahi’s best effort after several months of bloodshed is to come up with a toothless outfit called Ebube Agu,” the source stated.

Meanwhile, the Ebonyi State Governor, Dave Umahi on Wednesday declared that members of the Indigenous People of Biafra (IPOB) are not responsible for the attacks in the southeast.

Mad O: See The New Whip Actor ‘Alex Ekubo’ Bought For Himself(Video)
According to the Governor, bandits are the ones masquerading as members of IPOB’s Eastern Security Network (ESN) to attack the southeast region.