ANAMBRA 2021: APC To Emerge As Winner

ANAMBRA 2021: APC To Emerge As Winner

by GENTLE
in Politics, Trending Now
0

A chieftain of All Progressives Congress (APC) the person of Chief Ekene Enefe in Anambra, says the party is working assiduously to ensure it emerges victorious at the Nov. 6 governorship election. 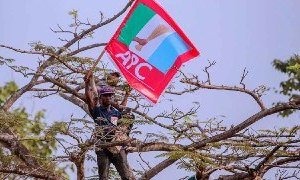 Enefe spoke on Friday at a grassroots mobilization campaign in Ogbunike Ward 1 and Ward 2 in Oyi Local Government Area (LGA) of the state.

ANAMBRA 2021: The Only Source To People’S Choice Candidate Is Transparent Party Primary – Umeoji

The chieftain, also the party leader in the area, commended APC members for their massive turnout during the membership registration/validation exercise of the party.

He said that it was an indication that they desired change. Enefe, however, called on the party to conduct a credible and acceptable primary election.

“Oyi and Ogbunike, in particular, are supposed to be one of the most developed communities in Anambra but we are disappointed with the APGA government.

“We are ready to support our party, the APC, to win the Nov. 6 election and that is why we are mobilizing strongly.

“Our only appeal is that the leadership of APC should allow the candidate that will emerge to be a true reflection of the wishes of the people, a free and fair primary will increase our chance by 50 percent,’’ he said.

Mr. Benjamin Ezeako, an official of APC in Oyi LGA expressed delight that the party was gaining ground in the area.

“We have been supporting the party in government in Anambra but we are ashamed with what we have as dividends of democracy.

“That is why we are throwing our weight behind APC because it is the party that will rule the state in 2022.

“We don’t want APGA anymore even though the first lady is our sister, we are calling on the entire Anambra people to support APC for better governance in the state,’’ he said.