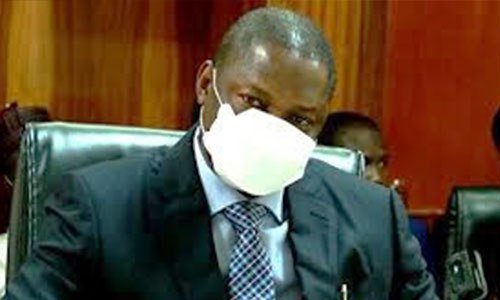 The Attorney-General of the Federation and Minister of Justice, Abubakar Malami was hospitalized after he collapsed in Sokoto state, northern Nigeria on Monday.

Recall that the Nigerian Minister of Justice was recently in Sokoto for the inauguration of the reconstructed State High Court complex by Governor Aminu Tambuwal.

It was gathered that the Minister of Justice collapsed after delivering his address at the ceremony and was quickly revived by his aides and dignitaries who helped him to stand.

Malami was subsequently hospitalised at a private facility upon his return to Abuja, Nigeria’s capital, the report said.

The Minister of Justice, however, attended the weekly Federal Executive Council (FEC) meeting on Wednesday but was returned to the hospital a few hours later, a source said.

The AGF and Minister of Justice, Abubakar Malami (SAN), on Monday, slumped before being revived during an official assignment in Sokoto.

He was immediately surrounded by anxious aides and dignitaries who raised him up from the ground after successfully reviving him.

Malami, who recently returned from an official visit to Turkey was in Sokoto for the inauguration of the reconstructed State High Court complex.

Malami: Buhari Is The Best President Nigeria Has Produced Since 1999

We learnt that the Justice Minister, whom witnesses said looked exhausted after his speech, collapsed and was revived.

A closed source to the AGF who confirmed the incident said he was currently at a hospital in Abuja after he was transported sick from Sokoto.

Malami, along with the Chief Justice of Nigeria, Justice Ibrahim Tanko, was in Sokoto on Monday to commission the reconstructed State High Court complex.

EFCC: Rochas Okorocha Is Not In Our Custody