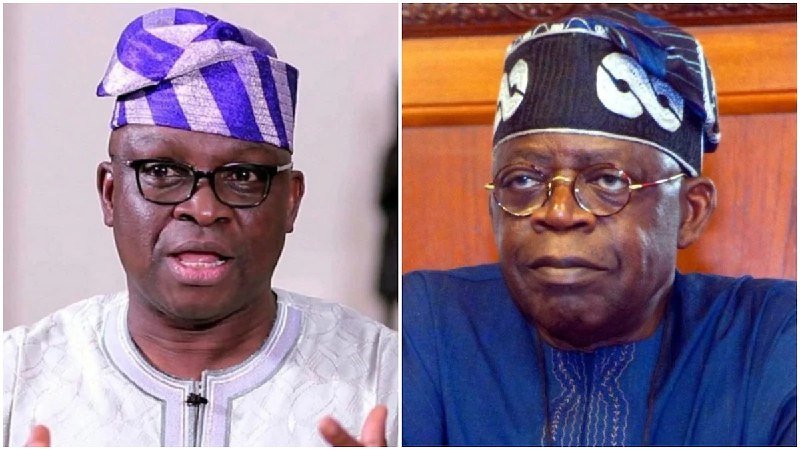 In an interview with Channels TV, the former governor made it known that even though Tinubu is in the APC, he respects him as a prominent Yoruba Man and won’t join bandwagon to insult him.

When asked if he will support Tinubu’s presidential ambition, He made it known that He is a member of PDP and won’t support a candidate of another party against theirs.

The Former Governor of Ekiti State, Mr Ayodele Fayose, have in a previous interview acknowleged the All Progressives Congress National Leader, Asiwaju Bola Tinubu, as a Yoruba leader over Obasanjo, saying Tinubu had paid his dues which needed to be acknowledged.

Fayose, who said he would not join the political enemies of the former Lagos State governor to shoot him down politically, described Tinubu as one of the greatest builders of men in Yorubaland and Nigeria at large.

The former governor and the Peoples Democratic Party chieftain, who spoke at his Afao Ekiti residence in Ekiti State as part of activities to mark his 60th birthday said he would not defect from the PDP as some other leaders had done.

He said, “I am not championing the course of Tinubu, I am not in the position to do that, but there is no denying the fact that Tinubu is a prominent Yoruba leader, whether in APC or in PDP. There is no gainsaying that fact. Fayose is a prominent son of the Yoruba nation. Governors Nyesom Wike, Ifeanyi Okowa and Okezie Ikpeazu are prominent sons of southern Nigeria.

Okorocha Allegedly Pays Obasanjo A Visit Over Rift With Uzodimma

“What I am trying to say is that we can’t hide their identities and goodwill for political reasons. We can’t deny their contributions. Other leaders from the North like Ahmadu Bello made different impacts. So, Tinubu has paid his dues. I have paid my dues, Okowa has paid his dues, Wike has paid his dues. We need to acknowledge them.

Is Sunday Igboho The Face Behind Collection of “Omo Onile” Fee, See What He Was Accused of