The Major Lakes In The East You Need To Know 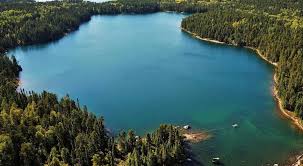 Lakes are bodies of water largely encircled by land and the Southeast is blessed with a couple of them, up to dozens even. But most of them can be argued for or against the status of lakes. There a number of them who are full-fledged lakes and are bodies of tourism. Here are the major lakes in the east you need to know and plan to visit one of these days.

The Uburu and Okposi salt lakes are located in Uburu and Okposi respectively. Uburu is a part of Ohaozara LGA while Okposi belongs to Ivo Local government, both in Ebonyi state. Uburu lake is the larger of the two. A better justification to where Ebonyi State got its slogan “Salt of the Nation”

Salt production is recorded to be one of the oldest practices in Ebonyi state and it is majorly among the women as the men always had other bigger and more tasking activities to engage in. Traditional methods of salt production have been a regular activity in Okposi Okwu for close 400 years.

No matter how crude the method, salt preparation is not a craft but a scientific process. No wonder the ingenuity of the women who process the salt is attributed to the mythical instruction of a god “Mmahi.” The name equally refers to the lake itself. This belief is heightened by the fact that right from the inception of this local industry, the salt producers have been making use of solar energy in an intuitive manner.

It would be recalled that Okposi supplied entire Eastern Nigeria with salt during the Biafran/Nigerian Civil War. The then Biafran scientists, after a series of tests, declared the brine from Okposi Salt Lakes as having the highest salinity among all lakes in Eastern Nigeria. A factory was built very close to the lake to enable the women with new production techniques, they also included the use of “alom” to affect the process of settling of dirt before it could be decantated and filtered. The now dilapidated industry still stands as a monument of the glory that was Biafra.

Between supplying salt which is a great essence, this salt lake offers a great view, that is, if you ever have the opportunity to visit this lake and the experience is something you’ll always tell a tale about.

Agulu Lake is one of the best tourists attraction sight in Anambra state. The scenes to behold are unarguably beautiful with the water stretching as far as the eyes can see even while standing on the newly constructed bridge by former governor of the state, Peter Obi.

The Lake has always served as a tourist center to foreigners, non-indigenes, explorers and students, especially, those in the secondary sessions who usually go for academic excursions. It will interest you to know that the traditional lake is also the source of Idemili River which runs across and serves different communities of Anambra. The location of the lake is along Awka road in Agulu, Aniocha Local Government Area of the state.

A potential tourist site, it is home to an estimated three hundred crocodiles and water turtles. Fishing is highly prohibited on the lake and the crocodiles, being sacred animals to the people, cannot be killed. There is a legendary intuition that the crocodiles in the Agulu Lake were instrumental in delivering the town from their opposition soldiers during the Nigerian civil war.

There is also an auspicious belief that these sacred crocodiles and turtles transform themselves into beautiful maidens and lured the enemy soldiers from their oppositions unawares into the lake where they would disappear without any trace. This practice according to the story helped them achieve some major wins. At noon the crocodiles and the turtles appear at the banks of the lake to take in sunlight.

Anambra state is one of the states in the southeast that has good traditional attractions such as scared streams, lake, with potentials for economic investment and tourism development, Agulu Lake is one.  Agulu Lake is not an ordinary lake; it is inclined traditionally, and it has cultural landmarks and is also believed to possess evil spirits. The lake is used by traditional worshipers for different spiritual rites performance and the water serves as a healing source or major source of medicine for different ailments.

More to know about Agulu Lake is that it offers tourism on boat rides, excursions and entertainment. The water served the traditional native doctors for different medicaments; the water is being sold in bottles on the market day where people buy it for various purposes. The lake also benefits the community economy through the fund gotten from tourist and different treatment medications. Also, the lake is believed to cure the which are people been possessed by evil spirits which are known as “Ogbanjes”.

Oguta Lake is a lean ‘finger lake’ formed by the damming of the lower Njaba River with alluvium. It is the largest natural lake in Imo State, Southeastern Nigeria; within the equatorial rainforest region of the Niger Delta.  Oguta Lake’s catchment area comprises the drainage area of the Njaba River and a part of the River Niger floodplain in the region south of Onitsha.

The lake is situated in Oguta about thirty miles (48.27 km) from the junction of the Ndoni and Orashi River. It is about five miles (8.05 km) long from east to west and a mile and a half (2.41 km) wide. The stream from Njaba River is the major inflow to Oguta Lake.

The other 3 tributaries are Awbana, Utu, and Orashi. The Orashi River flows past Oguta Lake in its southwestern portion. The lake is important to the people of the oil-rich Njaba River basin including Oguta,  Orsu, Mgbidi, Nkwesi, Osemotor, nnebukwu, mgbele, Awa Awo-Omamma Akabo as a source of water, fish, tourism and an outlet for sewerage. Uhamiri is the goddess of the Lake.