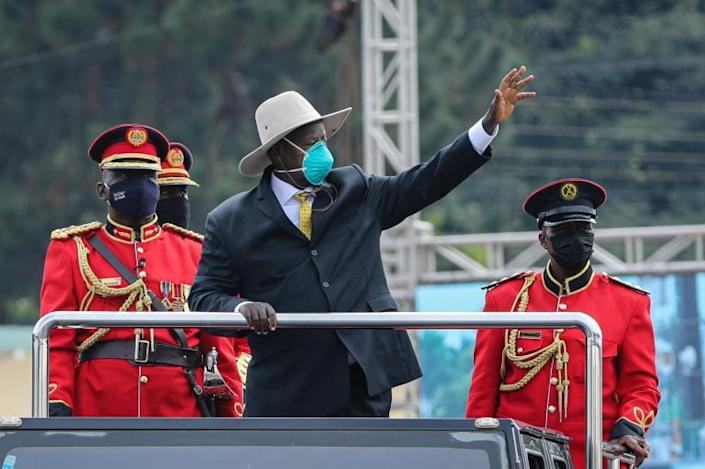 The President of Uganda, Yoweri Museveni, a 76-year-old politician who has served Uganda since 1986 was on Wednesday sworn in for another term in office, making it his sixth term as president of the African country.

Reports revealed that policemen were deployed around the home of his main opposition rival who decried the inauguration as a “sham”. Museveni was declared winner of the January election despite controversies and reports of irregularities during the polls.

Museveni today took the oath of office at a ceremony in Kampala broadcast on national television. The ceremony was attended by several African heads of state and other foreign dignitaries.

Museveni who appeared in a dark blue suit and his trademark wide-brimmed safari hat, during the swearing-in promised to “pay true allegiance” to the East African country he has ruled nonstop since taking power as a rebel leader in 1986.

Reacting to Museveni’s victory earlier, his major contender in the opposition party, Bobi Wine, who came second to Museveni in the ballot said loudly that the vote was rigged. Wine cried out that police and soldiers had “besieged” his home on the outskirts of Kampala and prevented him from leaving.

“Dictator Museveni is swearing in well aware he stole the elections and disenfranchised Ugandans and he is scared of people opposing the sham ceremony,” the 39-year-old singer-turned-lawmaker told AFP.

“Even if he has sworn in, we will continue the struggle to dislodge him from power through peaceful means and this will come soon.”

Meanwhile, an Igbo group in Lagos has declared their support for the former governor of Lagos State, Asiwaju Bola Ahmed Tinubu, on his quest to become the nation’s next president come 2023.

The group during their courtesy visit to the Bola Ahmed Tinubu (BAT) Foundation at the weekend, said the All Progressive Congress (APC) National Leader has its full backing should the latter agree to contest the presidential race.

Tinubu received the presence of royal fathers and leaders from the Igbo community in the state, High Chief Enyiwauzo Solomon Sunday Chukwu (Solochus), who coordinates the Obasa Movement (Ndi-Igbo Lagos).