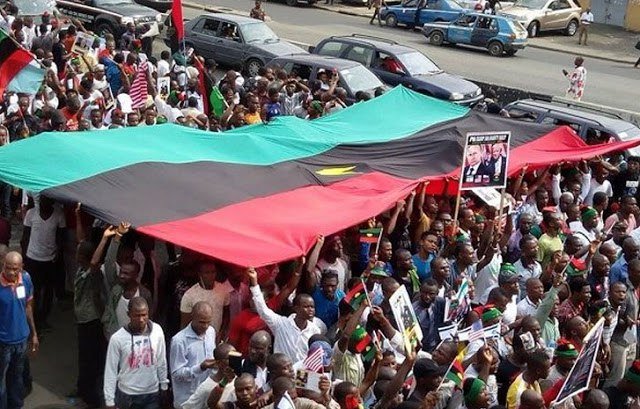 The IPOB said it is wicked for security operatives to humiliate vendors and journalists for distributing contents related to Biafra and pro-Biafra groups.

While the IPOB urged all stakeholders in the journalism profession to rise up and challenge the security operatives in its attempt to silence the press, it vows that it will not stop talking about its agitation for Biafra.

The group said this in a statement by its media and publicity secretary, Emma Powerful on Tuesday.

“We the global family of the Indigenous People of Biafra (IPOB), ably led by our prophet and liberator, Mazi Nnamdi Kanu, condemn in very strong terms, the incessant arrest and humiliation of newspaper vendors as well as the harassment of journalists by the Nigerian security operatives for writing or distributing Biafra, IPOB or Eastern Security Network (ESN)-related news materials. This is wickedness and a calculated attempt to suppress the press.

“It’s a global embarrassment that the Nigerian security agents will be hunting for newspaper vendors and journalists in Imo State and other Biafran cities for committing no crime other than writing or distributing news contents that affect Biafra, IPOB or ESN. How many times have the security agents harassed any journalist or newspaper vendor in the North for writing about Boko Haram or Fulani bandits?

“The same hypocritical Nigerian security agents allow viral videos and audios from Boko Haram and other terrorists to circulate in the media but when IPOB spokesman was featured on Channels Television, the federal government came on with N5 million fine against the station. Islamic cleric Sheikh Gumi keeps meeting with terrorists and has turned into advocacy for them through the media, yet journalist or newspaper vendor has been questioned over such reports.

“The Fulani-controlled Nigeria security agencies cannot suppress Biafra no matter how hard they try. Not even their draconian policies and anti-press moves can stop their atrocities and unprovoked genocidal attacks in Biafra land from being reported. The world must read our story!

“We, therefore, challenge the Nigeria Union of Journalists, NUJ, Nigeria Guild of Editors, Newspaper Publishers, civil society groups and democracy lovers to take up the fight. It’s not about Biafra, it’s all about free press and democracy. After all, the victims are not IPOB members but ordinary newspaper vendors and innocent journalists,” the statement partly read.

It also called on the international community to question the Nigerian government on why it has been hounding the press.

“The ultimate goal of the Fulani-controlled federal government of Nigeria is to intimidate journalists into submission so they will be too afraid to report the extrajudicial killings and other crimes against humanity perpetrated by the security agents against Biafrans.

“We know their game plan: this is only a prelude so that when eventually, they begin their proposed jihad in the Eastern region, no journalists and newspaper vendor will be courageous enough to report or circulate the story.

“But they must not be allowed to succeed or get away with this tyranny. The UN, US, EU, UK and lovers of democracy all over the world should ask Nigerian Government why it’s clamping down on the free press,” the statement added.