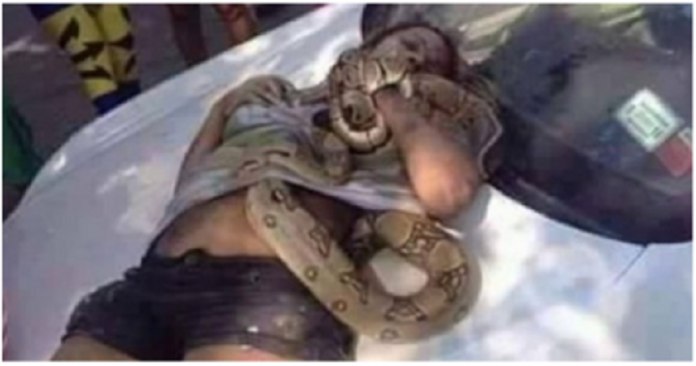 A 23 years old lady (name withheld) has been reportedly fed to a big python by her newly found rich boyfriend who is said to be a yahoo boy in Ghana.

The young lady met her untimely death when her newly found rich boyfriend decided to use her for money rituals.

The deceased is said to be renowned for dating boys that own cars and intentionally target Sakawa boys who combine modern Internet-based fraud practices with ethnic traditional or religious rituals to make more money.

It was further gathered that on that fateful day, her boyfriend came to take her out for a treat and a week after she was yet to return home.

Reports said her family became worried and continually tried to reach her through her mobile phones but they were switched off and other efforts to reach her proved abortive.

It was gathered that the lady’s brother saw the sakawa boy in town and immediately stopped him to ask about his sister, but the boy on sighting him quickly came out of his car and ran away.

When they searched the abandoned car, they found the corpse of the young lady in the boot with a big python wrapped around her.

JUST IN: We Are Ready To Negotiate – Twitter Tells Nigerian Government