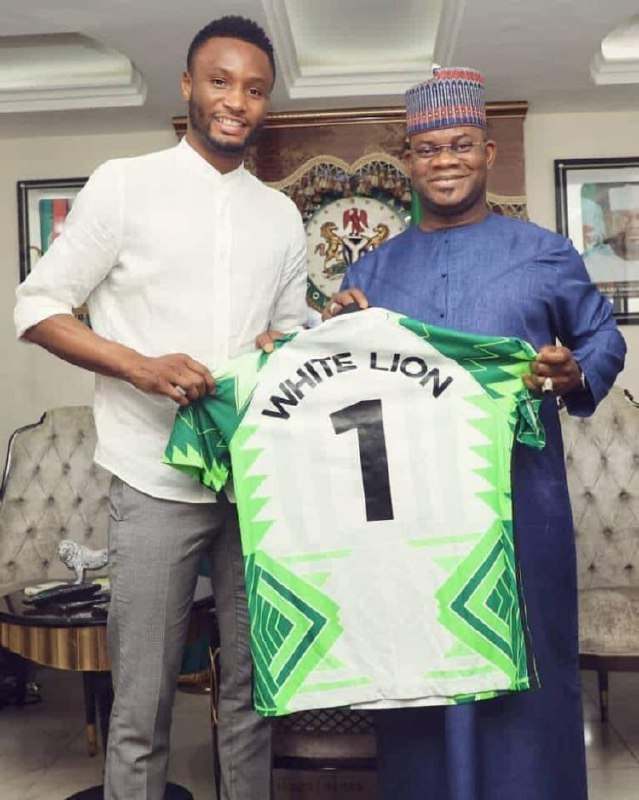 Former Super Eagles captain, Mikel Obi, has harped on the need for youth leadership in Nigeria while on a courtesy visit to Governor Yahaya Bello of Kogi on Sunday in Abuja.

The former Chelsea of England star it was time for the youths to come out and take leadership positions across all boards for the betterment of Nigeria, pledging support for Bello’s political aspirations.

He also lauded Bello for his achievement in Kogi in the areas of security, healthcare, infrastructure, education and agriculture.

“It is an honour for me to finally meet his Excellency personally after all the good things I have heard and read about him from not just the people of Kogi State but from Nigerians.

“My main aim is to come here to show my appreciation and to thank him for all the things he has been doing for the people and also to support him in whatever future political positions he wants to go into.

“I would like to be there to support him, to be there by his side through this journey for him to achieve whatever he wants which is for the betterment of Nigeria,” he said.

Obi said he was hopeful that Yahaya and himself could work together as a team to achieve success.

Responding, Governor Bello thanked the football star for the visit and his pledge to support the course for youth leadership.

the ace footballer for lauding his efforts in the state, noting that the security and welfare of his people and Nigerians remained his priority.

The governor noted that when there was political stability in a country, economic prosperity and development would be achieved.

He urged Obi to use his voice and his platform to advocate and call on youths to vie for leadership positions to change the existing narratives in line with the current realities.

“We can always come from our comfort zone to support each other. If we do not take charge, we are going to blame ourselves tomorrow. The opportunity has come and it is now, not a second later.

“So you are going to integrate with us, not just as the superstar, Mikel Obi, but as one who will be in tune with what is happening at home politically. In the western world, because they have political stability that is why there is safety and security,” the governor said.