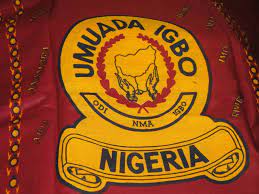 The Umuada are just a bunch of women, you say? A bunch of women set off the motion that will be later known today as the Aba Women Riot, the first major women revolt in West Africa that gave the colonial masters huge troubles and would inspired natives towards independent drives.

At the mention of ‘Umuada’ in any community or family issue, swords get sheathed, warring parties wave the white flag. This is the kind of power the Umuada wields in Igboland, they are not just a bunch of women, it is an institution.

The Umuada otherwise known as Umuokpu in some communities, are women from a particular community but married to other communities.

The word ‘Umuada’ is a compound word derived from two words; Umu is a collective noun that loosely translates as ‘people or children’ and Ada which translates as ‘first daughter’ in Igboland.

The Umuada group encompasses more than the first daughters to every woman in the community, married, unmarried, divorced, or separated.

The Umuada group is not like any other age-grade in Igboland, it is an institution that is the bedrock for both political and family issues. Their positions in the community and family are formidable and highly respected.

It’s safe to describe the Umuada as a socio-political group that acts as a functional forum for women.

The Role Of Umuada In Igboland

The group is a revered institution across Igboland, they stand as a totem of the old Igbo government.

The Umuada was an administrative arm in traditional Igbo societies, they were involved in major decision-making in the community.

During the pre-colonial era, Igbo women were more involved in the government, they participated at various levels of governance and held positions in the marketplace. Men and women worked together, during this time the Umuada/Umuokpu flourished. They helped to implement law and order, especially at the family level.

The Umuada above all is known for its role in conflict management in the community and families. They are known as peacemakers who preach love and an impartial institution.

When an issue has lingered or proved difficult to solve, the Umuada is called in to preside over it. Men are known to have compromised many times on the altar of justice but the Umuada’s sense of judgement has never failed, some attribute to their maternal instincts.

Recently, the Umuada of Ihite village in Ekwusigo Local Government Area of Anambra State, returned en mass from their various matrimonial homes to their community to wedge in on a protracted land dispute that had taken many lives in the village.

The land dispute had festered for years, breeding so much bad blood between the families involved. All efforts to bring the warring parties to a common ground failed till the Umuada stepped in.

The herculean task of bringing peace to an unsettled community for more than four decades fell on the Umuada of Ihite. Because they were only concerned for peaceful coexistence in the community, ditching any personal interest in the matter, they were ready to go a hundred yards.

“We prevailed on them to ensure that peace returns within one month, otherwise we will parade the village square naked. That frightened them and they had to invite all our brothers both home and abroad and before the end of one month, they asked us to come for the final peace meeting. “This was an issue that had lasted for over 40 years and throughout that period, the various families were not visiting each other. On the day the problem was resolved, we, the Umuada, cooked all the food eaten at the village square and the hitherto feuding families hugged each other and pledged to sustain the peace in the community,”

Thus this ancient institution proved its capacity in Ihite community.

Whenever the Umuada speaks, the whole community listens. It has never been said that anyone disobeyed the Umuada and got away with it; in fact, whenever the village council needs to implement a policy or sanction, the Umuada is called. Married women in the community fear the wrath of the Umuada, they play a major role in settling family issues especially cases of errant stubborn wives.

For Chief Prince Noel Ezenwa, a monarch in the Oba community, in Idemili South Local Government Area, Anambra State, the Umuada represents the tradition. According to him:

“The Umuada help to re-certify or re-invigorate that value for our tradition. It may seem archaic but we believe it is a warranty that depicts our value before the advent of the white man. Respecting them is the beginning of wisdom.

“For us Igbo, our custom and tradition are held in high esteem. Our value for tradition in real life is very important. The Umuada help to recertify that value for our tradition; development or modernization cannot stop or change the important roles they play in Igboland. Some may see it as olden days practice while others may see it as archaic, but no matter how archaic it may seem, we believe it is a warranty that depicts our value before the advent of the white man and it cannot be changed because it will amount to destroying Igboland without them.”

Hell hath no fury as a woman scorned. Charles Dickens or whoever came up with that must have the Umuada group in mind while saying that. Only this time it is not just one woman but women, imagine several women unleashing hades on you.

INSECURITY: Criminality Must Be Put To An End – DHQ