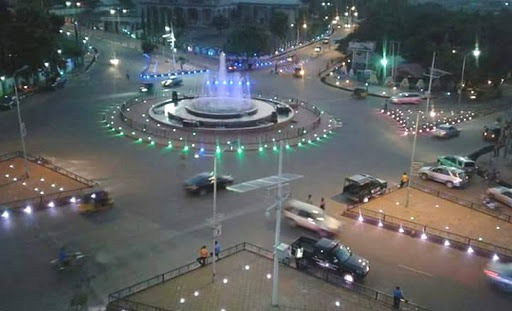 In every city, there are road intersections that have turned to landmarks leading residents and visitors alike to numerous areas of the city. Like a lighthouse, it has served as a navigational aid to travelers and commuters. There are junctions that stand out especially at the heart of the town. In one way or another, these junctions dictate the pace of the town and its people; if the junctions are gridlocked in the morning, business and offices are slow to take off.

Here are the top popular junctions to look out for in Igbo cities. If you don’t see your city or most known junction here, it is not an indication of its popularity. We chose ten and we are sure we will leave a lot out of the list. Our cities are so much and our popular junctions uncountable.

If you’ve ever been to Awka and you don’t know Aroma Junction, then you probably drove through the city blindfolded or asleep or buried in your phone. Aroma Junction is like the centerpiece of Awka city, it is an intersection that opens up to every part of the city directly or indirectly. It leads to the famous Nnamdi Azikiwe University.

Until a few years ago, Aroma was a mashup of road networks linking up in a chaotic intersection, with a flyover now, it has a semblance of sanity.

MCC Junction is located at New Cemetery Road, Onitsha, Nigeria, Anambra. MCC Junction has a direct link with Oraifite Street, Awada. It is separated from the new cemetery by Onitsha-Enugu Expressway.

After undergoing reconstruction by the government, the pedestrian bridge and the junction now have a fresh look.

Right in the heart of the town of the super-rich of Nnewi is the Nkwo Triangle. Nkwo Triangle is the activity hub of the second industrial city in Anambra, an ever-busy junction with the constant buzz of life.

It is the meeting point of three major roads with a statue of Nwafor Orizu barricaded at the intersection point. At a corner is the abandoned proposed Nnewi Shopping Mall.

It is popularly said that if you get lost in Owerri, just find your way to Control and from there you can get to any part of the country. Of course, that is exaggerated but it does not undermine the fact that the Control post is the focal point of heavy inward movement to the city of Owerri. It is marked by a roundabout structure with a statue right in the center.

Top Ten Places To Have Fun In Owerri

The roundabout is known with different names, some call it Control Post, Assumpta Roundabout, Onicha Road, or Port Harcourt Road.

As well as being the center of the city, it is your go-to point for those who have one or two vices, it is also a hot spot for sex workers. It is a favorite hangout spot for miscreants, especially at night. Generally, the Control post is the center of the black market in Owerri city.

This is possibly the busiest road in Owerri after the control roundabout, it is typically marked with a heavy gridlock.

Navigating through the city of Owerri is almost impossible with passing through this junction, it opens up to major roads including Aba road, Douglas road, Egbu, and Mbaise road.

During the Rochas-led administration in Imo State, it was marked with an elegant horse in the center of a roundabout edifice. The structure has since been taken down by the Uzodimma administration.

Also known as the Enugu-Aba-Portharcourt express junction, this is the point for every transport entering the commercial city of Aba from the East.

Ever busy with a steady gridlock, the first sight that meets you at the Osisioma junction is the uncompleted flyover of over 6 years which would be the first in Abia and a military checkpoint. The junction connects to almost every part of Abia state, opening up to other major junction in the city like the Umuojima junction, MCC junction, Livingword, and others.

Going by the name one would expect to see a mighty standing gate, to every resident of Umuahia it is the melting pot of the capital city of Abia.

Amongst the locals, it is often said that if a thief makes away with your valuables, no need to panic, just wait for the person at the gate. The gate is a composite of organized chaos.

The Top Ten Hideouts For Fun In Enugu

Gate is the most popular junction in Umuahia, you can get to any part of the city from there. It is the landing and take-off point of commuters.

As the take-off and landing point of commuters, it is crowded all the time with the buzz of automobiles. It is not just a junction, it was once the spot of the biggest commercial market in Umuahia, which has been relocated yet some of the traders hung around carrying out busy transactions. The travelers are also not left out from doing some shoppings in-between transits. Ishi-Gate Junction is situated along Aba Road, Umuahia, Asia state, Nigeria.

Otigba in the Igbo language translates to “drum beater” which explains the statue of three drummers standing elegantly in the middle of the Otigba junction. This is one of the most popular junctions in the city of Enugu, described by some as a picturesque landmark.

It is a popular bus stop, a busy part of Enugu located at Ogui Road. Otigba Junctions links to New Haven Road and then to Abakaliki Road which would take you to Abakpa, Emene, the Polo Park, and all of the GRA.

For a long time, Otigba Junction was a synonym for part-time prostitution as call girls made this their home every night. Governor Ugwuanyi has dislodged them from this site to allow for more decent sight in the city.

This junction serves as a major bus stop. Ogui junction is the connecting junction to most of the other bus stops in the capital city of Enugu.

First-timers in the city might mistake it to be a hangout spot, beautified with a water fountain and beautiful light ambiance, Presco junction is one of the most beautiful junctions you will come across in the South East.

It is a popular junction with a flyover leading to EBSU, Ezza road, and lots of other adjoining roads. It serves as the gate to the City, It’s proximity to one of EBSU campuses makes it a very busy place.

Presco junction is one of the areas with nightlife in the state’s capital, it is also a point of collision with the student population, residents, and corporate employees. It has supermarkets, wine shops, a shopping mall, and a fuel station dotting the landscape.

There are several hundred junctions across Igbo cities but these few should be marked out on your map, especially if you are new in town.