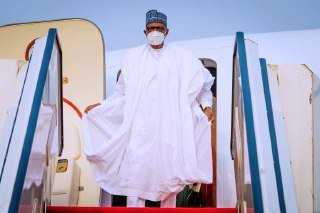 President Muhammadu Buhari has shelved his planned trip to London, where he was expected to see his physicians for a checkup.

Buhari had been scheduled to depart the Nnamdi Azikiwe International Airport, Abuja, for the British capital on Friday.

But his senior media adviser, Femi Adesina, announced postponement of the trip in a statement on Friday.

Latest News: Buhari Heads Out To London For Health Check Up

No reason was given for the postponement.

“The medical follow-up visit of President Muhammadu Buhari to United Kingdom earlier scheduled for today, Friday, June 25, 2021, has been postponed,” Adesina said, adding that, “A new date will be announced in due course.”

Anaedoonline.ng had reported that Buhari made his first trip to London in 2021 on March 30.

The current postponed trip would have made it the president’s 13th medical trip to the British capital since he took power in 2015.

Meanwhile, the postponement came amidst threats by some Nigerians to harass the president on arrival at the Abuja House in the UK.

MEETING: Buhari With Security Chiefs Ahead Of London Trip

Former presidential aide, Reno Omokri, who led a protest against the president during his last trip to London, had described the current planned visit as “one trip too many”.

Omokri said in a Facebook post: “You have refused to build hospitals for Nigerians, and if by July 10, you are still in London, then prepare for the Mother of All #HarassBuhariOutofLondon.

“You have had six years to develop the hearth sector. If you can spend $1.9 billion of Nigeria’s money to build a railway in Niger Republic, then you could have built hospitals to cater to your health and the health of Nigerians.”

Kidnapped Nigerian Students Who Are Still With Their Kidnappers Weeks After