Besides Shoes, Five Other Things Aba Is Known For 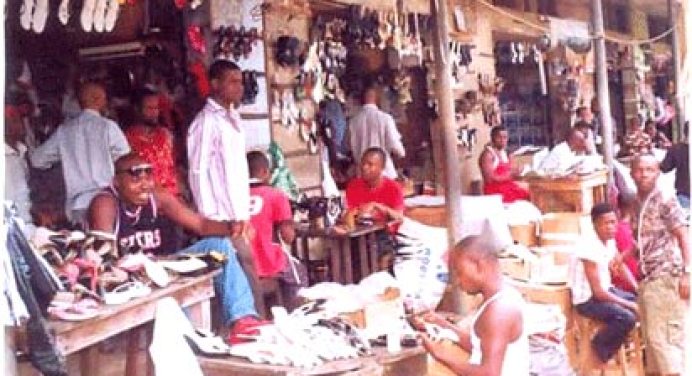 People say that the only thing that cannot be produced in Aba is a human being and that is because there is no prototype of it, of course, that saying is exaggerated but goes a long way to showcase the ingenuity of the people of Aba. Besides shoes, what are the other things Aba is known for? The answer is simple, “everything”.

Aba-made is a common name for everything made in Aba and at the same time, sometimes, it’s a connotation for “fake or inferior”. In most parts of Nigeria, there is a common conception that Aba produces the fakest and inferior version of imported goods.

There may be some truth in this in the past. Today, this is largely a fallacy. Aba artisans only make a replica of what they see around them and most times it is your purchasing power that decides what kind of quality you get.

Aba-made products are in a class of their own. For every class.

In every corner of the city, the markets, the roadsides, the streets, and the backyards have been turned into manufacturing sites for different products, some of the products include:

Shoes are undoubtedly the most popular of Aba products, but then have you seen the bags made in Aba? Top-tier leather, bespoke bags that speak class.

It’s a no-brainer that amongst a million things Aba is known for, that bags are among their top products too, bags and shoes go hand in hand. In almost every shop in Nigeria and beyond, Aba stands on showcase competing favorably with other bags in the market, sometimes masquerading or passing as a foreign product.

Produced from scratch with leather bought from other traders and sewing, These bags are arrayed in bold beautiful colors and multiple designs in front of their shops, it comes in all kinds such as men’s and women’s bags, conference files, traveling and school bags are on display.

Just like other Aba products, the bags are mostly modeled after big names in the fashion industry, these Aba artisans produce a near-perfect replicate of brands like Gucci, Balenciaga, etc. You might have an Aba bag in your collection or sling over your shoulder right now without knowing.

With the recent shift in the tide and welcoming of Made In Nigeria, some of the artisans boldly brand their products which makes them the better. It is estimated more than 4 containers of made in Aba bags leave the country every week.

Have you been to Shopping Center or Kents Aba? Have you seen the world-class designers there?
The fabric industry follows right on the heels of the leather products in Aba, after shoes and bags, Aba is known for its skilled tailors.
Amongst tailors in Aba, it joked that their clothes have been to places they’ve never been to, this shows the reach of the Aba tailoring industry. Just like bags and shoes, tailors have taken over the breadth and width of the city, one in every five people in Aba has a tailoring skill.

Top celebrities and politicians get their bespoke dresses from Aba, their creativity speaks volumes in the style and quality of their products. Any design you have in your head can be perfectly brought to life in Aba. Some of the tailors in Aba have a strong client base abroad who put their clothes on display in their boutiques.

Amongst all the leather products from Aba belts stand near the top of them. These belts do not just add to the name of the things Aba is known for; Aba is known for its quality rare leather belts that come in different designs and sizes.

Aba belts are so qualitative, that they are exported beyond the borders of this country.

There are several boarded-up warehouses where entrepreneurs are producing wine in Aba, albeit under questionable circumstances which they pass off for other popular products in the market.

Despite the questions surrounding the production of wine in Aba, other wine producers in the city adhere to the standards and have put Aba on the map for wine production. One of such entrepreneurs is 71-year-old Onyema Chima, the owner of Crispitas Wine. Crispitas Wine is recognized by NAFDAC, it is made up of pawpaw, orange, pineapple, mango, yeast, sugar, and water. He makes the wine from fruits found in the locality.

The wine industry in Aba is big and if harnessed properly, might even be the biggest export from Abia state.

Machine fabrication is probably the one sector in Aba products that has the least attention. Aba is a known Hubspot for shoes, bags, and fabrics but for those who know the inner workings of the city, there are thousands of technicians who are experts in industrial fabrication.

A quick tour around the city will show you why it is called the “Japan of Africa”. There are technicians specialized in the fabrication of engine boats, barges, and dredgers. Dredgers that have been deployed in the past within Imo state have been fabricated right in the heart of Aba. A dredger that is imported at more than 50 million can be produced for far less in Aba.

There are others who specialize in the construction of power factor systems, industrial controls, industrial food driers, and other industrial machines.

Machine fabrication in Aba is so vast that most businesses in the town use machines fabricated by local technicians. There are arguments by the technicians that the machines designed and produced in Aba are simpler and more durable than the foreign machines which may be complex and their parts may not be readily available.

Just like Uche Jumbo said ‘Everything can be made in Aba’.